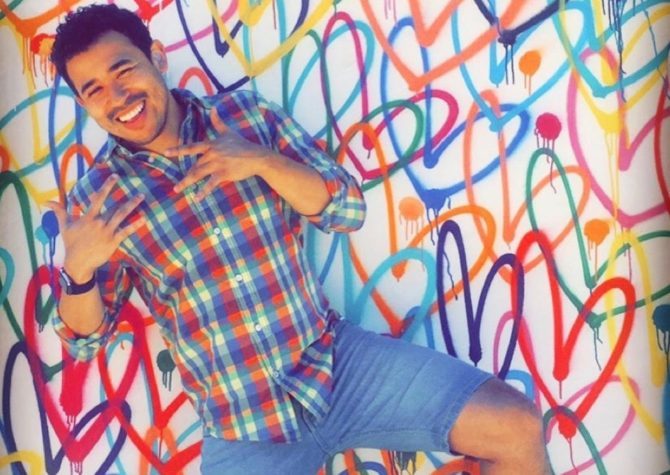 Pride season is upon us, and this year we’re ringing it in by spotlighting the folks who make us proud to show up to work each day–the artists, activists, performers and personalities who make our community shine.

Dickie Hearts is a deaf actor and filmmaker based in Los Angeles. In 2015, his short film “Passengers” won the Best Filmmaker title at the Disability Film Challenge. Earlier this year, he appeared on Netflix‘s hit series “Grace & Frankie,” where he played a hearing impaired young man. Follow him on Instagram @dickiehearts and on Twitter @DickieHearts.

For some reason, most of my Prides are vaguely hard to remember. All (half) kidding aside, I do remember my first L.A. Pride. It was 2011. I had just driven across the country from Virginia to Los Angeles. I was wearing a pink tutu and looking so fabulous that they let me cut the super-long line at the Abbey. I danced with a really hot firefighter guy. It was a great way to settle into the new gayborhood.

Blacking out the day of the parade and later waking up in someone’s car in West Hollywood with my shoes missing. Yeah. Thankfully I was fine and got home safe. My iPhone was also stuck in that looping Apple logo mode. That was also a wake-up call for me #WildTimes #NeverAgain

As a Deaf, Gay Person of Color, I would say yes because of what’s happening right now in Trump’s America. Some LGBTQ rights have already taken steps back. Not to mention disability issues. So there is no more crucial time than now to be resilient and fight back. As an actor and a filmmaker, nothing drives me more than to tell those intersectional LGBTQ stories that also include disability themes.

I would say NYC Pride, but I’m checking that off this June! So I guess I would say…. Amsterdam Pride? I’ve always wanted to go back to Europe and explore the gay scene. What better spot than Amsterdam, right?

What is your ideal Pride outfit?

Body covered in glitter, a harness, and a rainbow speedo. Something like that.

Who is your dream Pride date?

A sincere, confident man who is willing to learn American Sign Language for a Deaf guy like me!

I will be joining the march at L.A. Pride this year and, of course, partying it up with everyone I know, including my Deaf gay boys. I’m also very much looking forward to attending NYC Pride. I just cannot wait. Honestly, that’s really one of the best ways to fight back: celebrating your Pride.