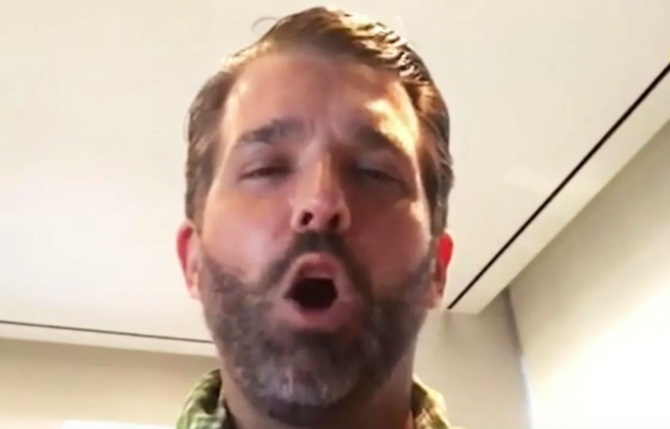 Related: Why did Don Jr. text Mark Meadows on Jan 6? Mary Trump has an answer.

Hours ago, the ex-president’s eldest son retweeted a comment from Chad Prather, the Blaze TV host currently running for Texas Governor, calling for anyone connected to Jeffrey Epstein and Ghislaine Maxwell’s underage sex trafficking operation to be publicly named.

“If it was a list of conservatives it would all be public info, get 24/7 media coverage, the FBI would actually do, you know, their f-ing jobs, and people would rightfully be going to jail for a long time,” Don Jr. tweeted in response. “Instead we get sealed evidence, total silence, and inaction!!! Wonder why?”

If it was a list of conservatives it would all be public info, get 24/7 media coverage, the FBI would actually do, you know, their f-ing jobs, and people would rightfully be going to jail for a long time.

Instead we get sealed evidence, total silence, and inaction!!! Wonder why? https://t.co/EDgUcqmBV7

Jr.’s own father maintained a close bromance with Epstein for decades. The two met in the late ’80s and were frequently photographed together, usually at social events with their arms around beautiful women.

In 2002, Trump famously called Epstein a “terrific guy” in an interview with New York magazine, saying, “He’s a lot of fun to be with. It is even said that he likes beautiful women as much as I do, and many of them are on the younger side.”

Related: Jeffrey Epstein’s chilling remarks about homosexuality before his death will make you cringe

When Maxwell was arrested in July 2020, Trump was asked about it while taking questions from the White House podium, to which he responded: “I just wish her well, frankly.”

Given all that, you’d think Don Jr., who is currently fighting a subpoena from New York Attorney General Letitia James seeking his testimony in the ongoing civil investigation into the Trump Organization, might want to sit this one out. But apparently not.

It’s your Dad, dude. Maybe Mark Meadows can get you your Dad’s number so you can have a word…

Your father was on his plane 7 times bro.

By all means, let’s hear the list….careful what you wish for Jr.

I agree. They should totally release this guy’s name and all the evidence.. pic.twitter.com/4Bj5QOifeg

Ouch! Those were pretty brutal. Shall we go continue?

Says the guy dodging a subpoena. Sure junior

Jr asking for his daddy to be arrested?

I guess Daddy’s on the list. This day just gets better. pic.twitter.com/pBV1zlhUhw

Last month, Maxwell was found guilty of child sex trafficking and other offences in connection with Epstein, who was found dead in his jail cell in August 2019. She now faces decades in prison, along with a second criminal trial for two charges of lying under oath about Epstein’s abuse of underage girls.

Subscribe to Queerty for a daily dose of #politics #chadprather #donjr. stories and more