Donald Trump wants his supporters to carry an official ‘Trump Card’. Of course, they’d have to make a donation for the privilege of doing so.

The cards were unveiled in two emails from Trump’s Save America PAC to supporters on Wednesday. Insider was among the first to report on them. The red and gold cards look like credit cards and carry Trump’s signature.

The emails invited supporters to choose their favorite design. Clicking the link took people to a fundraising page.

“The card you select will be carried by Patriots all around the Country,” the first email said. “They will be a sign of your dedicated support to our movement to SAVE AMERICA, and I’m putting my full trust in you.”

A follow-up email reminded subscribers, “We’re about to launch our Official Trump Cards, which will be reserved for President Trump’s STRONGEST supporters.”

“We recently met with the President in his Florida office and showed him four designs. Originally we were planning on releasing just one design, but when President Trump saw the cards on his desk, he said, ‘These are BEAUTIFUL. We should let the American People decide – they ALWAYS know best!'” 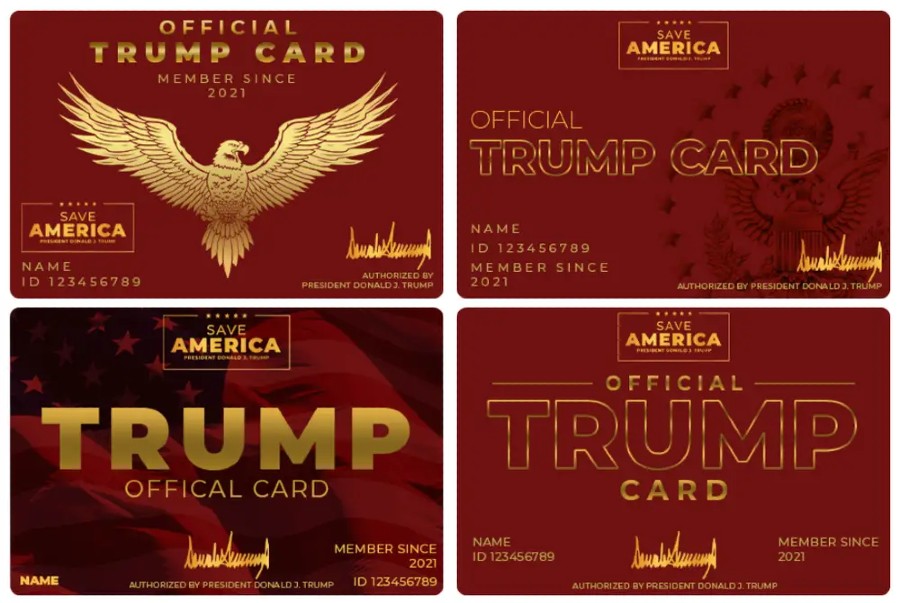 Pretty soon, many had spotted an error with these officially endorsed pieces of merchandise. One of them, with a stars and stripes background, had ‘official’ spelled as ‘offical’.

Among those to mock the error was the centrist GOP group The Lincoln Project.

Others said this was Four Seasons Total Landscaping all over again.

Some questioned the eagle used on one of the designs.

Trying to think where I have seen the new Trump Card insignia before 😡🤦🏻‍♀️ pic.twitter.com/sZ3VNgFUvt

One of the Trump cards misspells “Official” as “Offical.”

Sure, they’re Nazis, but they’re not grammar Nazis. pic.twitter.com/XGkTkMVUQf

And most were simply mystified over the purpose of the card.

Is it a credit card, luggage tag, ice scraper for the winter… What does his card do for you?