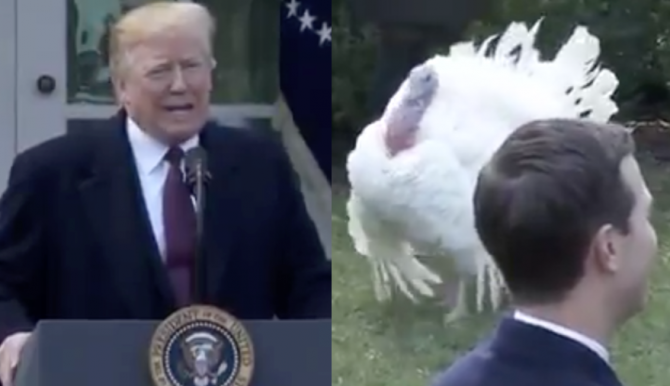 While President Trump has abandoned even the appearance of a leadership role in the intensifying coronavirus pandemic, he will finally emerge from his post-election sulking to show the nation he’s still in charge — of turkey pardoning.

The annual presidential turkey pardon ahead of the Thanksgiving holiday is meant to be a light-hearted affair, and a way for the White House to project a warm spirit and a sense of normalcy. This year, it is anything but normal.

Trump, now in a lame duck presidency while he continues an ever-more desperate legal strategy to claim victory in the 2020 election, has stayed almost entirely out of the spotlight in the weeks since November 3. That changed ever-so-slightly on Monday, when he tweeted that he’s directed his administration to allow President-elect Joe Biden‘s transition. “Our case STRONGLY continues, we will keep up the good fight, and I believe we will prevail!” he wrote in the same tweet.

He’ll step out with the White House framed in the background to reassure a divided nation that all is well, where he’ll pardon one of the birds, named “Corn” and “Cob.”

It will likely resemble a funhouse mirror reflection of this event, held just after the 2018 midterm election:

FLASHBACK: In 2018, President Trump attacked Carrots the turkey for refusing to concede he had lost the vote on the White House turkey pardon contest.

"This was a fair election… unfortunately, Carrots refused to concede and demanded a recount."

While Trump is sure to make puns about how the 2020 election was unfair, he’ll continue to undermine the peaceful transition of power by casting doubt on his legitimate ousting from office.

The odd tradition, which was made an official event by George H.W. Bush in 1989, has fallen during other national crises.

When President Obama presided over the event in the wake of the Great Recession in 2009, he said:

“In more tranquil times, it’s easy to notice our many blessings. It’s even easier to take them for granted. But in times like these they resonate a bit more powerfully.”