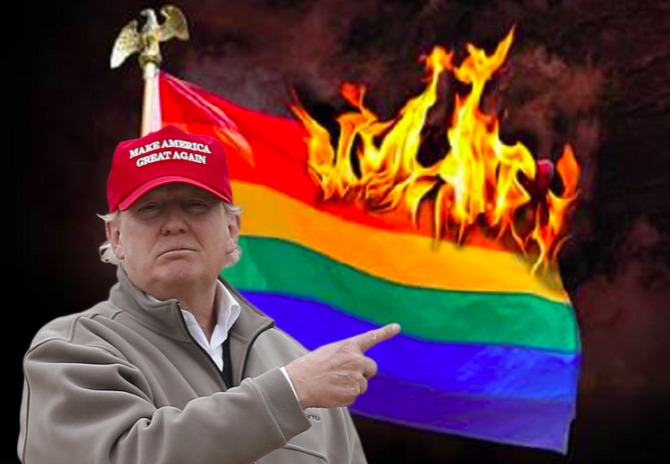 Fresh off the heels of his speech at the antigay Values Voter Summit last week, and just one day before a planned speech at antigay Heritage Foundation, Donald Trump took a moment to praise virulently antigay U.S. Senate candidate Roy Moore.

During a press conference at the White House Rose Garden yesterday, Trump blew off a question from a reporter who asked point-blank whether he disagrees with Moore’s beliefs that gay sex should be illegal.

He continued, “He ran a very strong race. The people of Alabama–who I like very much, and they like me very much–but they like Roy, but we’ll be talking to them, and I can report back to you then, OK?”

Moore, who recently won the Republican primary to fill Jeff Sessions’ Senate seat in Alabama, is a longtime hater of the gays. In 2015, he stated homosexuality should be illegal in the U.S.

“Sodomy was declared illegal by the United States Supreme Court in 1987,” he said. “It said there was no right under the constitution to enlarge the fundamental rights of homosexuals.”

He also called on Congress to impeach the Supreme Court justices who voted in favor of marriage equality and was removed from his seat as an Alabama Supreme Court chief justice after refusing to honor the ruling.

And just a few months ago, in February 2017, he appeared, for the fifth time, on Kevin “Kill the gays” Swanson’s extremist radio show to talk about the evils of homosexuality.

Trump, who actually endorsed Moore’s primary opponent, Luther Strange, has said Moore will make a “great senator” and that he plans to campaign for him in the weeks leading up to December’s special election.

A Cygnal poll published on Thursday found Moore has an eight-point lead in the race.

Related: Donald Trump will pander to ANOTHER antigay group this month