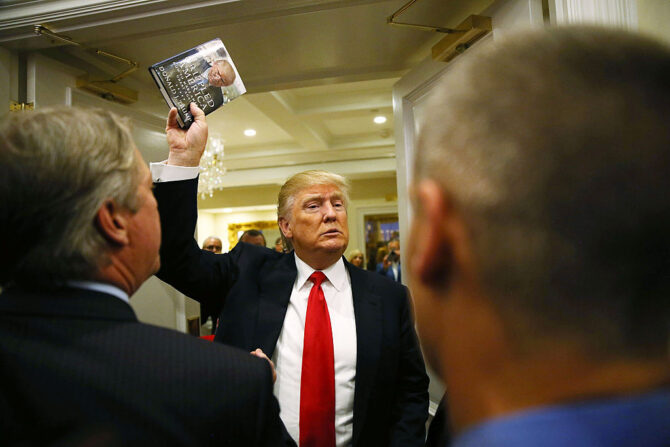 Speaking at an event in Austin, Texas, this past weekend, the ex-president told supporters: “This is the greatest hoax, heist. This is one of the greatest crimes in the history of our country. And sadly, the prosecutors don’t want to do anything about it.”

Trump went on to say he doesn’t think anyone will “enjoy” the book, but it’s necessary for him to write for posterity’s sake.

“You’ll be very depressed when you read it,” he told the crowd, “but we want to have it down for historic reasons.”

Related: Trump claims his crappy picture book has sold 100K copies in a week even though it clearly has not

The Crime of the Century is being self-published by Don Jr.’s Winning Team Publishing, which previously released a picture book called Our Journey Together documenting Trump’s one-term presidency last December.

Last June, Trump claimed to have “turned down two book deals, from the most unlikely of publishers” because he did “not want a deal right now.” But he added: “I’m writing like crazy anyway, however, and when the time comes, you’ll see the book of all books.”

Publishing insiders, however, said no mainstream house would touch a Trump memoir, with one insider telling Politico, “It would be too hard to get a book that was factually accurate. That would be the problem. If he can’t even admit that he lost the election, then how do you publish that?”

The fact you’re making a profit from false accusations is disturbing.

Will it be in the horror, or fiction section?

We lived it for 4 years. I certainly don’t need to read about his single term to know what a crime it was.

It’s an autobiography about how he provided polling data to Russia to influence his 2016 election win.

So he wrote his autobiography? That title suits him well.

Does it come with crayons or colored pencils?

And how many copies has the RNC pledged to buy…? 🤷🏻‍♂️

I trust this will be an audiobook only.

Nobody ever accused MAGA of being readers.

Written by a ghostwriter, naturally. pic.twitter.com/TexfUAmQKv