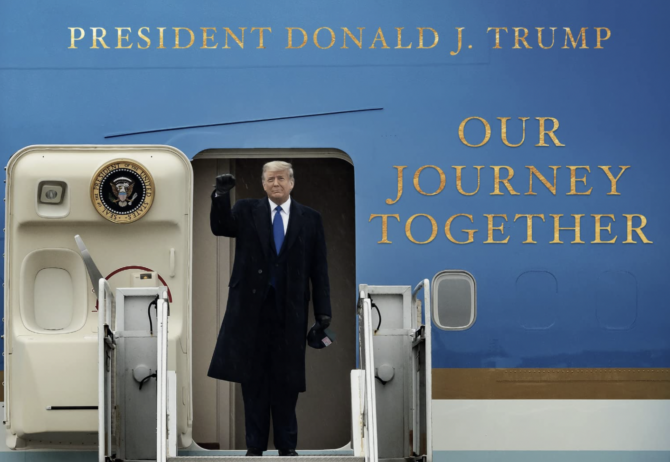 Hey, remember that crappy coffee table book Donald Trump claimed sold 100,000 copies of in its first week of publication last month despite the fact that it wasn’t available to purchase on any major book retailers’ websites?

Well, apparently now he can’t find enough paper, ink, glue, or leather to produce the thing because of supply chain issues. And, of course, he’s blaming it all on President Biden.

Related: Trump claims his crappy picture book has sold 100K copies in a week even though it clearly has not

“Our Journey Together” was released last month through Don Jr.’s newly formed publishing house, Winning Team Publishing, and features 300 photos from Trump Sr.’s time in the Oval Office, along with captions allegedly written by the one-termer himself.

Speaking to Fox Business host Lou Dobbs this week on episode of Dobbs’ podcast, “The Great America Show”,  the ex-president said, “Nobody ever heard the term ‘supply chain.’ The supply chain, it was automatic. … Now all of a sudden, it’s the two words people are using most because you can’t get anything.”

He went on to say that his coffee table book has been “very successful” despite the fact that no copies are actually being printed at the moment.

Fact check: The book had an initial print run of 100,000 copies, according to a December report by the Washington Examiner. According to Trump’s website, however, the “first batch” included 200,000 copies. In either case, it would be mathematically impossible for the book to have sold 240,000 copies, as he claims.

“The publisher, the printer, who is one of the biggest in the country, I think he said he has eight plants, he said, ‘Well we have one problem — we can’t get paper, we can’t get ink. We can’t get glue. We can’t get leather for the covers.’ He said, ‘I’ve been doing this for 40 years, I’ve never had a problem getting anything.”

Another fact check: The publisher is Don Jr., who created Winning Team Publishing in 2021 for the sole purpose of publishing “Our Journey Together.”

“I think it would easily qualify to be a New York Times No. 1 bestseller,” Jr. boasted. “And we’re doing it ourselves, taking on a big old industry. It’s been pretty awesome.”

So awesome that they can’t actually get the book printed.

Now, here’s what Twitter has been saying about the whole thing…

This suggests the existence of a Trump shitposting coffee table book that we all need to see https://t.co/xcXswiuuAn

Trump claims the term "supply chain" had never been heard before. His excuse for dumb ass junior not being able to print his yugely successful picture book. Delusional Donnie.

The only Trump coffee table book that I want is the one filled with indictments and pictures of all of them being taken to prison.

This past June, Trump boasted that he was "writing like crazy" and working on "the book of all books" about his presidency.

In November, he revealed the book would be a coffee table book filled with photos. https://t.co/4P6rI5bQhb

Bro someone needs to make a book out of all the trump scandals. That’d be like the best coffee table book ever.

Trump is selling a "coffee table" book and for 200 some odd dollars he will send you a signed copy. The majority of people who would buy this book probably don't have coffee tables. He should call it a milk crate book.