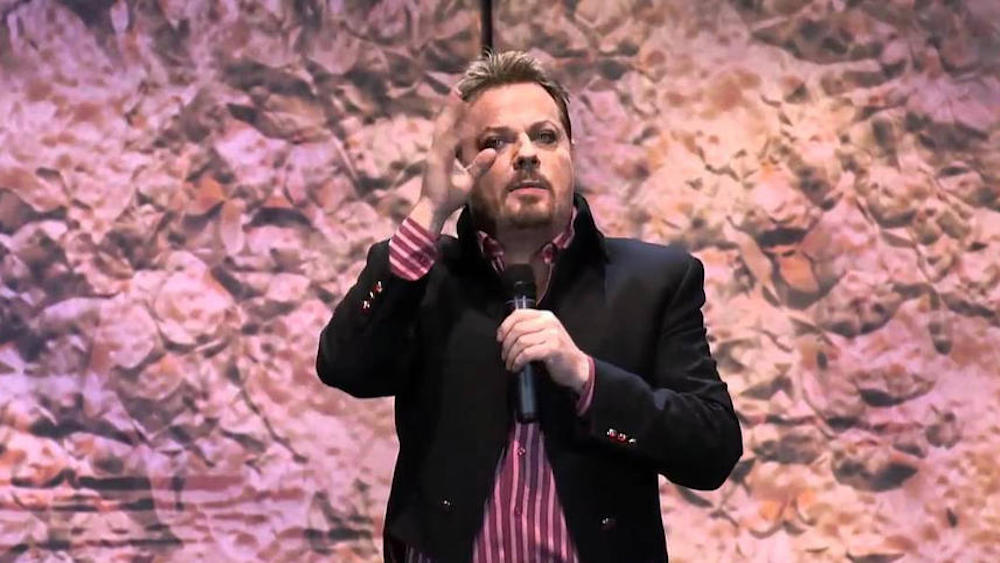 Self-described “straight transvestite and male lesbian“ Eddie Izzard plays a psychopathic aristocrat who hunts down three high school degenerates and their straight-laced classmates in Boyz in the Wood, a horror comedy film that premiered at the 2019 SXSW Conference & Festivals in Austin, Texas.

In the film, the cross-dressing British comedian stalks students while they treacherously hike through the Scottish Highlands in hopes of earning “The Duke Of Edinburgh Award.”

Dean, Duncan and their mate who goes by the name DJ Beatroot, get in trouble after accidentally burning down a restaurant by trying to light their poop in a public restroom.

The earnest yet criminally stupid trio seem like dead meat as their school teacher Mr. Carlyle charts their course over a dangerous hillside terrain: Dean smokes exploding “hash,” Duncan eats powdered cocoa as camp food and DJ Beatroot slaps promotional stickers over every stone and tractor he can find. But dumb luck and overconfidence help them journey forward despite the numerous perils.

In a Q&A session after his film’s world premiere, director Ninian Doff said someone suggested Izzard as a great choice to play the villain during casting, and the director immediately agreed. Izzard heard the director’s pitch over the phone and merely said, “Okay, I’m intrigued.” After a few weeks of silence, the director heard that Izzard wanted in.

It’s easy to see why Izzard would enjoy the project: His jokes often poke fun at upper-class pretense. Plus, Doff is a music video director who brings this aesthetic into an Edgar Wright-esque survival suspense film. His genuine love for his dumb anti-heroes shines and a (un)healthy dose of psychedelics and Instagram filters makes it all hilariously over the top.

There are two hilarious music video segments and antics involving psychedelic rabbit poop. There’s also a ridiculously funny side plot about an overzealous police department torn between investigating the boys and finding a notorious bread thief depriving the countryside of ciabatta and baguette.

Because the film is Scottish, American viewers might need subtitles in order to catch all the jokes. But even missing a few, hilarity abounds. Fans of stoner humor, Trainspotting, and Izzard’s irreverent jokes will adore this film.