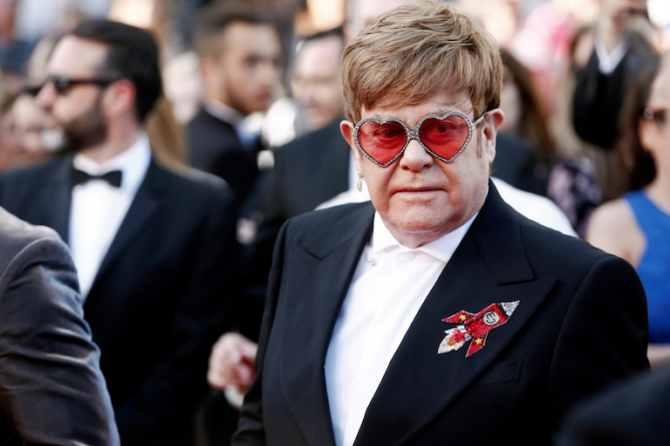 Elton John endured a terrifying in-flight ordeal when his private jet encountered a hydraulic failure at 10,000 feet and was forced to make an emergency landing.

The “Rocket Man” singer was on his way to New York from the UK when trouble hit. About an hour into the journey, the pilot was forced to turn around near the coast of southern Ireland.

To make a bad situation much worse, 80 mph winds made the emergency landing a harrowing ordeal. The plane had to abort landing twice as firefighters from six local stations and ambulance crews waited on the Farnborough Airport tarmac.

“The terrible weather and epic gusts made it almost impossible to land. Two attempts to touch down failed,” a witness told The Sun.

“The plane was being buffeted and couldn’t make it. The aircraft’s nose was far too vertical. The plane was descending and was halfway along the runway when it gave up trying to hit the tarmac. It soared back in the air.

“A crowd had gathered after word went around that Elton was in difficulty. And as the plane came around again for a second attempt to land, the storm was doing its worst.

“The airport’s windsock was horizontal and the aircraft was being rocked from side to side by the wind.

“The pilot made a valiant attempt to get down with the jet ‘crabbing’ into the storm. But it didn’t make it and had to head back upwards.

“It was only at the third attempt to land that the plane got down. The pilot made a flatter approach and the wind had dropped slightly. Everyone watching was mightily relieved.

“It was a horrible thing to see, and you wouldn’t have swapped places with Elton on that small plane for anything. I bet he said a few prayers of thanks.”

John was reportedly (and understandably) shaken by the drama, but not enough to keep him from hopping on a later flight and making his scheduled performance at Madison Square Garden.

John is currently performing on his Farewell Yellow Brick Road Tour, with dates scheduled through July 2023.