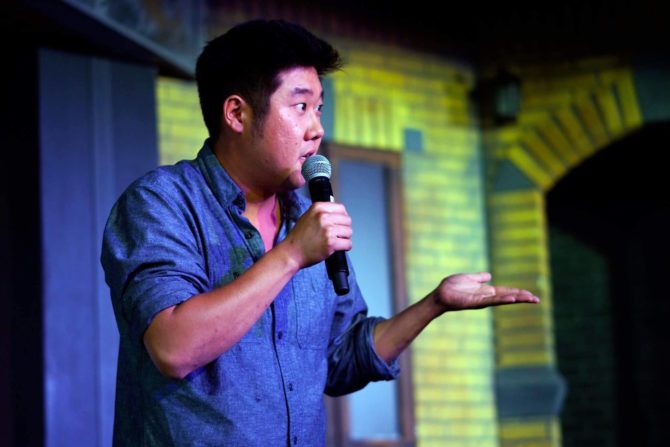 Peter Kim is a Korean American raised by Christian immigrants from Flushing, Queens. He is a comedian, writer, and actor based in Chicago, with credits including The Second City, SeeSo’s “Shrink,” and NBC’s “Chicago Justice.” He also hosts a weekly podcast called “The Ajumma Show” (Ajumma being the matriarch of the Korean Community) and live Queer themed shows “Baby Wine'”at The Annoyance Theater and “The Kiki” at The Laugh Factory. Follow him at @peterkz or visit www.paypeterkim.com.

My very first Pride was while I was living in San Francisco, and still in the closet, so it was very lonely. I went to the parade and I was like, “Yes! THIS is what I’ve been missing. Uninhibited joy, and ass-less chaps!!”

Two years ago, in Chicago, I was invited to ride on a float sponsored by a progressive talk radio station so there was no music, thus very little dancing. So we just cheered a lot and threw beads at people.

I keep hearing great things about Provincetown so would really love to check out P-town’s Carnival. Seoul’s Queer Cultural Festival sounds incredible as well. The idea of being around a bunch of Korean Queers sounds like a dream!

I remember last year I thought it was going to be the biggest Pride ever due to the passing of the Marriage Equality Act. But I think this year’s is even more important to us because of the ultimate Mother-boy, Mike Pence.

“Born This Way,” as if it were a choice!

The ultimate pride outfit is something that accentuates your best assets. So for me that’s a light weight ensemble that modestly covers everything except for my legs. Pretty sure the RompHim’s gonna make an appearance this year.

Actually I’m going BACK on that float I was on 2 years ago, but this time we’re bringing our own music. Also, this will be the first year I’m going to Pride with a committed boyfriend, soooo I guess we’re gonna have to break up soon!