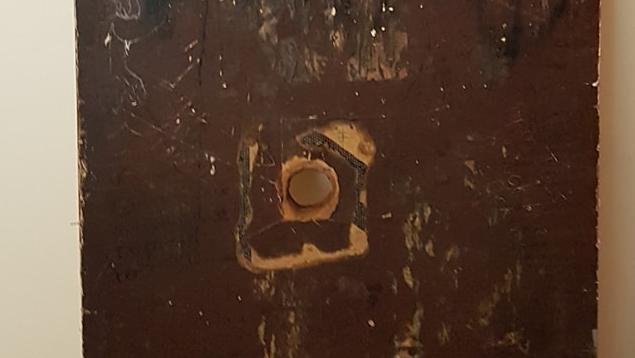 The Western Australian Museum has been around for 120 years and is home to some of the area’s most important scientific and cultural artifacts. But its latest acquisition is causing quite a stir among patrons.

The artifact is a wooden door with a glory hole hollowed out in the center. It came from the men’s restroom in an old train station and was donated to the museum’s Perth location, which is currently undergoing renovations, by Neil Buckley.

“It’s really an important part of social history and this is how we used to have sex at a time when it (homosexuality) was illegal,” Buckley, who saved the door when the train station was set for demolition in 1998, says.

He adds, “Because it was illegal, we had to go to a beat that was off the main drag, and that was the only place many men could meet other gay men because it was still illegal in clubs.”

Alec Coles, chief executive of WAM, believes it’s an appropriate piece for the museum to display once it reopens because it represents a part of history that rarely gets talked about.

“We often talk about museums as safe places for unsafe ideas,” he says. “Clearly the LGBTQI community is a very important part of Perth’s society.”

According to Perth Now, private gay sex acts between consenting adults were illegal in Western Australian all the up until 1990, and it wasn’t until this year that a law allowing people to have historic homosexual convictions expunged from their records was finally passed.

But not everyone’s on board with the glory hole being on public display.

Tony Krsticevic, a member of of the Western Australian Parliament, says he doesn’t think it’s a “suitable exhibit” for young people.

“While it is appropriate for the WA Museum to chronicle the rich and proud LGBTI community as a significant element in the State’s history,” he says, “such an object is too tacky for display at what will be such a great new venue.”

He adds, “I’m not sure it is a suitable exhibit to be seen by school-children who will flock to the new WA Museum when it is completed.”

But Coles isn’t too concerned. He says the museum is a place where people “can explore topics that are maybe controversial, sometimes contentious, sometimes even confrontational, but the kind of places they can be explored in a responsible and measured way and hopefully without rancor.”

Meanwhile, Buckley understands Krsticevic’s concerns and recommends there be a content warning for sensitive museum patrons.

“It would depend on how it is presented,” he says. “I would like to think we would always be sensitive.”