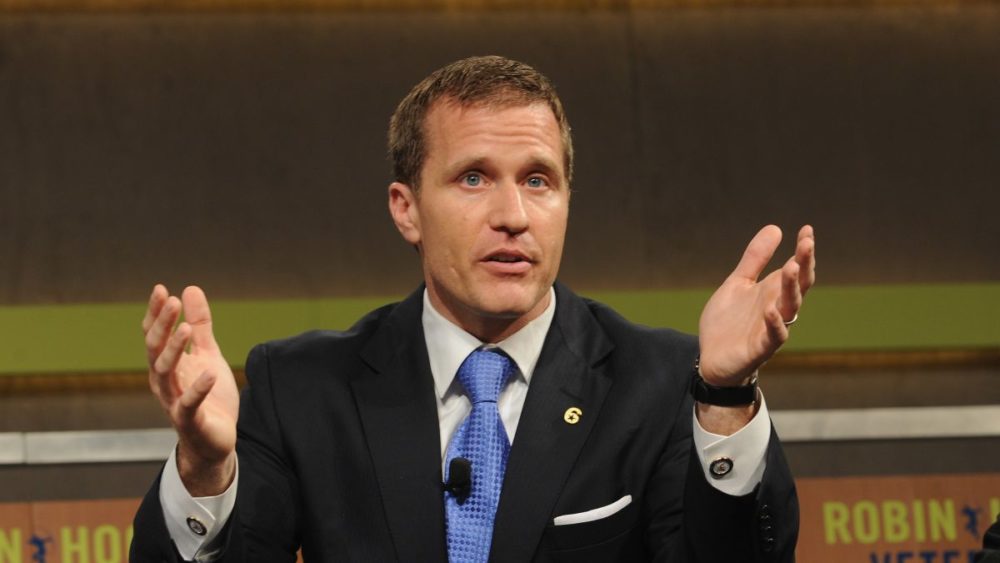 It looks like the final curtain has been drawn on “family values” politician Missouri Gov. Eric Greitens’ career.

The 44-year-old Republican with national ambitions has officially stepped down from his state’s governorship after a months-long scandal involving allegations of sexual misconduct and blackmail.

Just to recap: Back in February, Greitens, who believes “people of faith are under attack in America” and doesn’t believe trans people should be allowed public bathroom access, was charged with first-degree felony invasion of privacy after his former hair-dresser-turned-mistress accused him of tying her to a chair in a basement, forcing her to perform oral sex on him, then trying to blackmail her to keep quiet about their extramarital affair.

When the scandal first broke, Greitens denied anything violent or nonconsensual happened, calling it “a months-long consenting relationship between two adults.”

Meanwhile, Greiten’s wife, Sheena, said she was standing by her man, claiming they have an extremely “loving marriage and an awesome family” and that “anything beyond that is between us and God.”

Today, Greitens announced he will be stepping down from the governorship effective Friday.

“This ordeal has been designed to cause an incredible amount of strain on my family,” Greitens said during a press conference this morning, before launching into a laundry list of all the wrongs that have been done unto him.

“Millions of dollars of mounting legal bills, endless personal attacks designed to cause maximum damage to family and friends. Legal harassment of colleagues, friends and campaign workers and it’s clear that for the forces that oppose us, there is no end in sight. I cannot allow those forces to continue to cause pain and difficulty to the people that I love.”

The charges against Greitens have now been dropped.

Speaking to the press earlier today, St. Louis Circuit Attorney Kimberly Gardner said it’s “time for us to move on and help the state of Missouri get back to the business of government.”