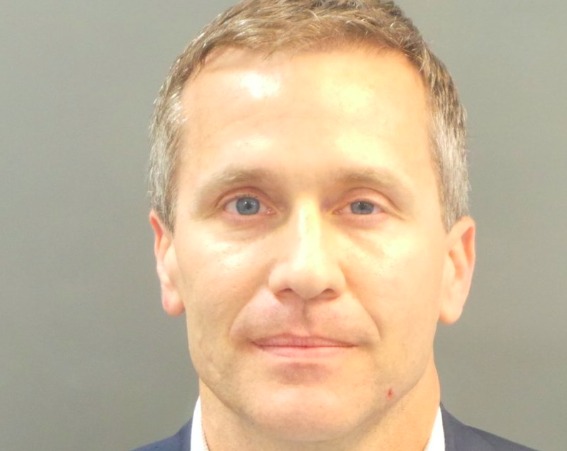 This time it’s Missouri Gov. Eric Greitens, who was just arrested and indicted amid allegations of sexual misconduct and blackmail.

43-year-old Greitens, who believes “people of faith are under attack in America” and doesn’t believe trans people should be allowed bathroom access, was charged yesterday with a first-degree felony invasion of privacy after a woman claiming to be his former mistress accused him of trying to blackmail her to keep quiet about their affair.

To make a long story short: Last month, Greitens admitted to cheating on his wife after a local news station aired a segment on the affair, including audio of the mistress confessing to her then-husband about her relationship with Greitens.

In the recording, the woman claims Greitens took a video of her after tied to a piece of exercise equipment. He blindfolded her and undressed her before threatening, “You’re never going to mention my name, otherwise this picture will be everywhere.”

After the shocking news broke, Greitens and his wife, Sheena, released a joint statement that said:

A few years ago, before Eric was elected governor, there was a time when he was unfaithful in our marriage. This was a deeply personal mistake. Eric took responsibility, and we dealt with this together, honestly and privately.  While we never would have wished for this pain in our marriage or the pain that this has caused others, with God’s mercy, Sheena has forgiven and we have emerged stronger. We understand that there will be some people who cannot forgive but for those who can find it in your heart, Eric asks for your forgiveness and we are grateful for your love, your compassion, and your prayers.

Sheena Greitens released an additional statement on her own, claiming she and her husband have “a loving marriage and an awesome family,” and saying that “anything beyond that is between us and God.”

Lawyers have allegedly turned over hours of compromising audio on Greitens to authorities, prompting the FBI to open an inquiry into the Missouri governor.

Greitens was taken into custody yesterday afternoon. He was released on bond shortly thereafter and will appear in St. Louis City Circuit Court on March 16.