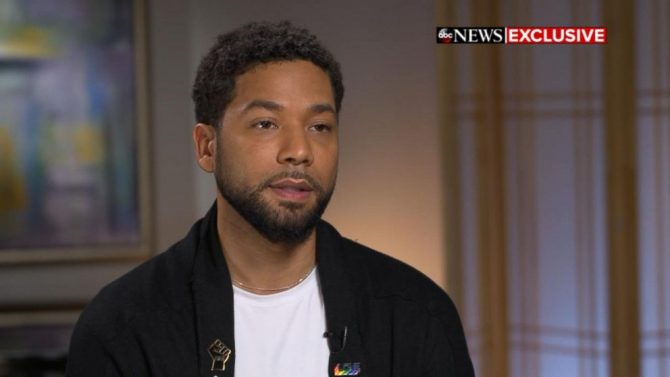 Jussie Smollett sat down with Robin Roberts on Good Morning America for his first interview since the racist and homophobic attack against him in Chicago last month.

In the interview, which aired this morning, Smollett tells Roberts he’s “pissed off” about all the misinformation that’s been circulating since the January 29 assault, as well as at the people who refuse to believe him.

"I look down and I see that there's a rope around my neck." @JussieSmollett recounts the details of exactly what happened that night of his attack. https://t.co/b5efiP0JCG pic.twitter.com/VltIlf0dYy

Smollett goes on to say the fact that so many people automatically branded his story #fake news “says a lot about the place that we are in our country right now.”

He continues: “For me, the main thing was the idea that I somehow switched up my story, you know? And that somehow maybe I added a little extra trinket, you know, of the MAGA thing.

“I didn’t need to add anything like that. They called me a f*ggot, they called me a n*gger. There’s no which way you cut it. I don’t need some MAGA hat as the cherry on top of some racist sundae.”

"I don't have any doubt in my mind that that's them. Never did." @JussieSmollett tells @RobinRoberts he knows the two people captured in an image by police are the same people who attacked him that night. https://t.co/b5efiP0JCG pic.twitter.com/tcR4OSjfAA

When asked by Roberts why he didn’t initially hand over his phone to police, Smollett explains, quite reasonably, “They wanted me to give my phone to the tech for three to four hours. I’m sorry but I’m not gonna do that, because I have private pictures and videos and numbers.”

Asked why he didn't initially hand his phone to police, @JussieSmollet says: "I have private pictures and videos and numbers…private emails, my private songs, my private voice memos…by then inaccurate false statements had already been put out there." https://t.co/3HbyU2SFxe pic.twitter.com/4bycFHnlMp

Shortly after the interview aired, Chicago Police announced they had identified “persons of interest in the area” who are now being questioned by authorities, although they they are “not yet suspects.”

(P.S. For those who still refuse to believe Smollett’s story, consider this: Why would a popular actor on a hit TV show who is at the height of career make something like this up? What does he possibly have to gain?)

Related: 6 powerful takes on the attack on Jussie Smollett