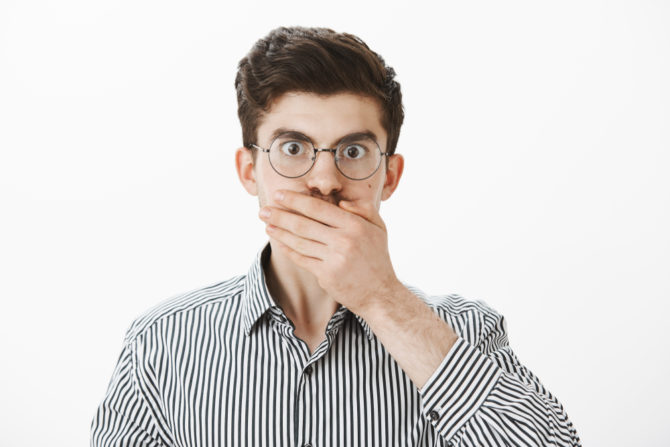 The original poster had to face the music after he came out to a friend over Skype. “I hadn’t fully closed my bedroom door, and when my friend asked, ‘Have you told your parents?’ I responded, ‘Oh, NO, not yet, I couldn’t tell my parents!’” he wrote. “MY MOTHER WAS WALKING PAST THE DOOR. Her natural over-protective response was ‘WHAT WOULDN’T YOU TELL ME.’ (She thought I was doing drugs or something.) I sh*t a brick.”

Related: Guys recount the funniest things that have happened to them during sex

A commenter on the post said he ended up coming out to his father at a miniature golf course. “He says I should go talk to the woman standing at the end of the stand,” he recounted. “I said, ‘She’s not really my type, Dad.’ He grunts and turns his head for a few seconds. He then points at a guy nearby and asks, ‘He your type?’ with a giant, cheesy smile. I then made a joke that I liked my guys a little beefier.”

Another guy got more than he bargained for when he came out to his brother. “I got all drunk and couraged up, called him, and started letting it all out, drunkenly, unaware that he was in a car full of his friends with me on speakerphone,” he said. “I finished my little spiel, expecting some sort of response from my brother, and instead got a round of cheers and applause from an SUV full of drunken straight snowboard bros in Colorado. Totally mortifying for a moment but then completely reassuring.”

Related: Redditors sound off on the gay lingo they hate the most

Another guy came out to his mother very recently — after seeing the film Bohemian Rhapsody. “It gave such a ‘I don’t give a F, Freddie had it much harder, there’s no perfect moment, do it yourself’ mood that I went home, sat across a table with her, and told her straight away. I’m glad I dropped it off my chest. Everything’s fine, and nothing basically changed. And she now wants to see the movie, haha.”

And speaking of cinematic revelations, one commenter had a Force-ful crush at age 12, writing, “I semi-came out to my sister and brothers when I accidentally said that Ewan McGregor in Star Wars: The Phantom Menace was hot.”