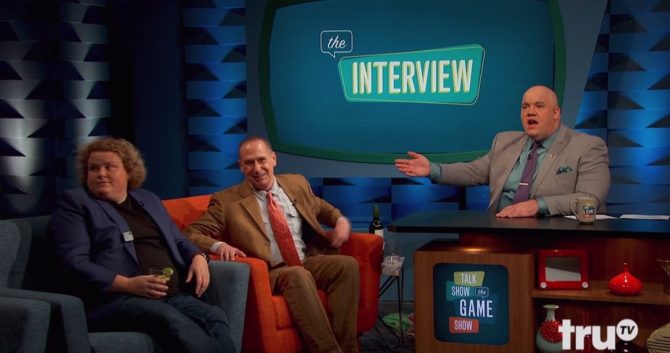 If you haven’t caught the show yet, you’re missing out on one of the most deliciously queer spectacles on television. Each week, Guy welcomes a panel of guests, and then pits them against each other in a talk-show competition to be the most interesting. Points are awarded for good stories and jokes; penalties are meted out for being boring.

Naturally, the show is extremely gay, from the guests to the judges to the questions to the physical challenges. Pretty much everything.

And on an upcoming episode, pity comedian Adam Cayton-Holland. He learns that hard way that it’s not easy being a good guest. He’s given a red card after a story about birds goes south, and sent to a penalty box — “too boring,” rule the gays around him, and he’s kicked off of the set mid-interview. (Lesbian comic Fortune Feimster just looks on in bemusement while all this happens.)

He’s replaced, delightfully, by Scott Thompson of The Kids in the Hall. Scott basically invented gay comedy on cable back in the 90s, though he doesn’t get enough credit for it. At a time of intense homophobia, he was unabashedly queer and confrontational and hilarious, and he’s an unjustly overlooked icon of gay liberation. If every talk show evicted their tedious straight guests and replaced them with Scott, we’d all be living in a better world.