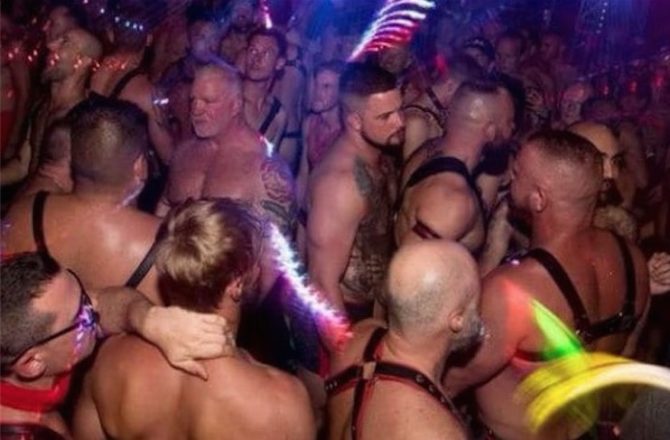 “I’m so tired of all this political correctness,” Pete says.

We are at the Eagle in New York City.

“Why do they have to come here? Can’t we have one place that is just for us?”

They are a group of young guys, early 20’s, dressed in bright colors, one carrying a purse and wearing high heels, dressed in a leather Tom-of Finland style hat, carrying a leather paddle, another in a skirt and a leather harness.

“They’re making a mockery out of the leather scene, out of being a man.”

“Right, cuz you’d hook up with one of them?”

“I don’t know, the one in the harness is pretty hot.”

Remember when former Dragula contestants on tour in the UK were turned away from the Manchester Eagle because they had a woman in their group?

And across the globe, a popular LA party for “Dads” and muscle bears refused entry to a trans man because his ID stated his gender as female, even though he presented as male.

I’ve received countless emails and comments on my blog from people who have experienced discrimination for not being “masculine” enough.

“I was recently turned away at a gay bar in San Francisco because my boyfriend was in a dress. We were told the party ‘wasn’t for us.’ When I asked what that meant the guy at the door just looked at my boyfriend and said, ‘This party is for men only.’ In San Francisco! I mean, this is supposed to be the gay capital.”

“I was turned away at a bear event in LA because, as the doorman put it, ‘We don’t let drag queens in here.’ I tried to explain to him that I wasn’t a drag queen. I am a trans- man. But even having to say that was humiliating. I’ve earned the right to call myself a man. Why do I have to constantly explain my gender? But he didn’t care. He kept calling me a drag queen. Finally, my friends and I just left.”

“I once got a fifteen-minute lecture at the door of a gay bar here in San Diego for even setting foot in there,” wrote Jess Keys, also known as the artist Xanadu Rocketship, who is a self-identified bisexual woman. Jess performs at local Southern California drag shows and is a well-known drag ally. “I was there to meet my friend after he was done performing. The door guys said things like, ‘Keep your gross hands to yourself. Don’t even make eye contact with anyone. If they get aggressive with you, security is gonna let them. If we could legally ban women, we would. Most men in here hate women.”

I’ve seen how gay nightlife can internalize some of our most negative and unhealthy tendencies. Growing up in a hetero-normative world that often demands men to act and behave according to strict societal rules on “masculinity”, a world where any deviation from these guidelines will get you called a faggot or sissy, or rejected for not being “male” enough, it is easy to feel insecure over our masculinity, to fall victim to internalized homophobia that leads to idolizing often repressive and toxic versions of masculinity, and to shame and oppress femininity and “femme” men.

We label ourselves as Bears and Otters, Dads and Boys, Tops and Bottoms, Masc and Femme. We try to fit each other into these clearly defined boxes that do nothing but limit who we are.

When a guy I was chatting with recently asked me what I like to do in bed, I told him, “Lately I’m feeling more like a bottom.”

“You? But you’re like this alpha male. How is a guy like you a bottom? What a waste.”

What does my masculinity or feminity have to do with my sexual preferences? Why can’t I just enjoy bottoming, or topping, regardless of who I am as a human being?

When someone labels me a bear, they often make assumptions about who I am sexually based on how I look. Just because I’m feeling like a bottom today doesn’t mean tomorrow I won’t be feeling like a top. If you want to wear a dress and a leather harness to a leather night at your local gay bar, I think that’s awesome. If you want to go in full pup gear that is also awesome. But when did dressing like a puppy become more socially acceptable in our community than dressing in drag?

Being attracted to masculine attributes is not a bad thing, and being masculine doesn’t make you toxic. It’s when we use these concepts to judge each other’s worth, to make ourselves feel better than, or to make others feel less than, that there’s a problem.

I’m not here to tell anyone who to be attracted to or who to hook up with. Hook up with whoever you want. That’s none of my business. But what is my business, what is all of our business, is how we treat each other as a community.

When we start refusing people entry to gay or queer Spaces based on physicality, race, gender or their position on the masc/femme continuum, we have a real problem.

Did we really survive the AIDS crisis, political and religious intolerance, hate crimes, and homophobia just to write “masc only” on dating apps?

Are we, as men, as a community, so afraid and insecure that someone else’s masculinity or feminity is a threat to who we are? The world can be a hostile place to queer people, and the only way any of us survive is together. As a community united and strong.

Be the femme-est dom top out there, or be the most alpha bottom you can. Be whatever you want. No one gets to limit you or tell you who you are or how to behave unless you let them. And why on earth would you do that? 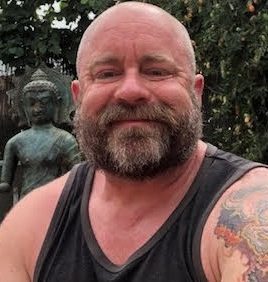 Jeff Leavell is a writer who lives between Los Angeles and Berlin.  He has written for Vice, Them, Hornet, to name a few.  His blog, The Discerning Daddy, ranks as one of the top LGBTQ blogs on Queer Sexuality, Culture, and Politics. You can find more of his writing at jeffleavell.com.  He is on Instagram as leavelljeff.