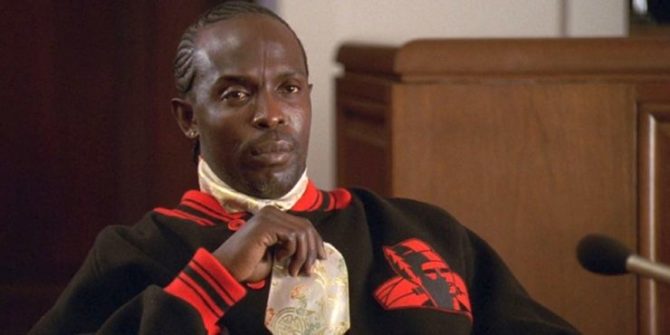 The Underrated: The Wire

By now, The Wire, the crime drama series created by David Simon which spent its five-season run gobbling up awards, is well known in the entertainment zeitgeist. The show follows the ongoing conflict between the Baltimore Police Department and the fictional Barkside drug syndicate, and how the lives of cops, drug runners and the city’s residents intersect, and very often, violently collide. A talented cast that includes Idris Elba, Dominic West, Frankie Faison, Leo Fitzpatrick and a baby-faced Michael B. Jordan brings the predictable gravitas to the material, which offers no shortage of commentary on race, poverty, crime and politics in the contemporary United States.

Our big reason for offering up the series as a Weekend Binge, however, comes in the form of the show’s most creative character: Omar Little, a gay, shotgun-toting street hood played with cunning and intensity by Michael K. Williams. Throughout the show’s five seasons, Omar walks the razor’s edge between thuggery and heroism. Though he resorts to violence and often aids other criminals, he also coordinates with police to stop other, more vicious criminals and protect the people closest to him. While Omar portrays himself as an intimidating madman in public, privately he’s an affectionate and tender man, nurturing his boyfriends and protecting his neighborhood from violence when he can.

Quite simply, Omar Little is one of the most unique and complex gay characters to ever land on television. He’s The Punisher mixed with Robin Hood: frightening and crazy at times, but not easily dismissed as a villain, either. Ten years after the Series Finale of The Wire, we’re still deciding how we feel about his moral character. Rarely does a character–and his fierce contradictions–stick with us in such a way. We recommend giving The Wire a look for Omar’s sake: he’s a queer character unlike any other we’ve ever seen.