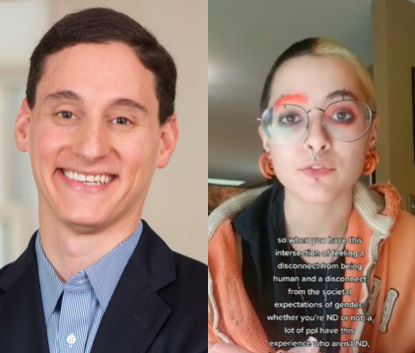 Republican candidate Josh Mandel has reached the point in his campaign where he has begun personally attacking teenagers to score political points.

TikToker @fleshlythings (formerly @themthembian) regularly posts videos about topics that are important to them, including de-stigmatizing mental illness, autism awareness, and queer issues, as well as documenting their journey with a chronic illness.

Earlier today, Mandel tweeted a video the 18-year-old that was first uploaded to TikTok last November. In it, they talk about pronouns and say that, if you’re not comfortable using another person’s pronouns, “Don’t interact with them and just shut up about it!”

Unfortunately, Mandel didn’t listen to that sound advice. Because rather than just shut up about it, he chose to tweet the video along with the caption: “This is what liberals want to teach our kids.”

This is what liberals want to teach our kids. pic.twitter.com/gr7pxcThdF

To be clear: Here we have a 43-year-old man running to be a U.S. Senator using his social media platform to mock an 18-year-old for talking about queer issues.

This isn’t the first time Mandel has gone after nonbinary people on Twitter. He’s been on a bit of a tear recently, tweeting all sorts of nonsense about gender identity, pronouns, and his own personal definition of “science.”

There are only 2 genders.

If they were so good at “science” they would know the difference between a boy and a girl.@JennaEllisEsq absolutely correct:

We don’t have to comply. https://t.co/Afpa3HPV9X

There are only 2 genders. Science.

I just saw they/them in someone’s bio. What in the world does that mean?

Here’s how people are responding to Mandel attacking a teenager…

“If you dont like it just dont interact with them” pic.twitter.com/JdlYlL31BV

What do you want to teach them besides xenophobia, misogyny and bigotry?

Mandel’s plan to run as the most mentally unstable senate candidate continues.

Oh no, so scary. Children learning things. Let me get the fainting couch. 🙄

And this is what you want to teach our kids pic.twitter.com/ndGvYKrzCj

Better than teaching them to be white supremacist insurrectionists

This is false and you know it. You are just trying to rev people up with your ENDLESS culture wars, which is basically the only strategy the GOP has. You are such a loser, truly. Be better.

Have you ever once posted your vision for Ohio or is it all just culture war bullshit like this?

More of your sick obsession with kids. It’s creepy, bub. Get help.

Better to have a guy living in his mom’s basement while living a cosplay conservative fantasy overturn our democracy right Sport? pic.twitter.com/droM56IbIm