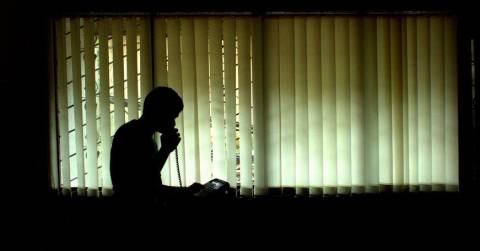 A government employee in New Zealand is accused of stalking a local businessman. He got away with it for over two years, and likely would have continued, had his cover not been blown by one small scrap of paper.

The paper was found in the console of the accused’s car. On it was the businessman’s name and email address along with the word “GAY!”

“That was your mistake, wasn’t it,” prosecutor Mary-Jane Thomas told the defendant, whose name has not been released, in court this week, “leaving it in the console of the car?”

Up until then, Thomas said, the man had been “very, very clever about covering the tracks.”

According to prosecutors, the 39-year-old had been harassing the victim for over two-and-a-half years. The harassment included creating fake online dating profiles using his photo and contact information and sending sex toys to his office. The victim also says a letter was sent to his house with a picture of him with penises drawn all over his face and a note accusing him of cheating on his wife.

Prosecutors say the defendant also texted the victim from various phone numbers. Some of the messages were threatening, others accused him being gay. Not just that, but he also handed out the victim’s phone number to men at gay bars, resulting in the victim being bombarded with unsolicited calls and sexts.

Oh, but there’s even more.

The defendant is also accused sending fake letters to the victim’s neighbors telling them he was being investigated for sex offenses.

After a tipster alerted cops to the scrap of paper in the defendant’s car, police searched his house and found a total of seven phones which they believe he used to harass the victim.

But the defendant denied the allegations. He testified this week that one of the phones was for work, one was for personal use, one was his wife’s, another had been set up for children to play games. As for the other three, those ones were simply “faulty.”

“Did you have bad luck with phones?” Thomas asked.

To which the defendant replied by saying, yes, as a matter of fact, he did. One time, he claimed, he was climbing over a fence and broke the screen of one.

Hmmm. We’re not sure talking about climbing over fences with electronic devices when you’re on trial for stalking someone is the best thing to say, but we digress.

It’s not clear what started the 30-month long feud. The judge in the case is expected to reserve his verdict.