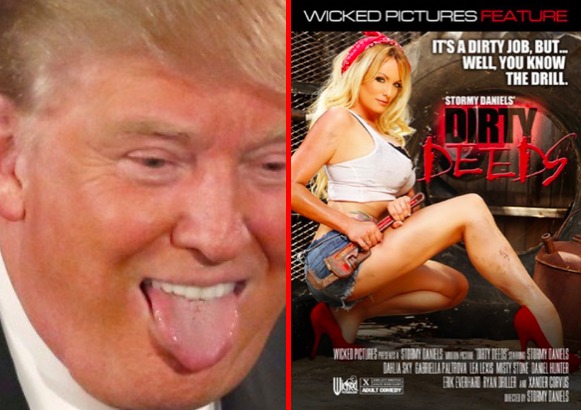 You knew that Stormy Daniels was just the tip of the iceberg.

According to a new report in The New Yorker by Ronan Farrow, Donald Trump had a consensual affair with another woman, Karen McDougal, for nine months starting in 2006. Trump and McDougal met at a party at the Playboy Mansion following an episode of The Apprentice.

Trump got McDougal’s number and the pair began talking by phone. At their first date, in a bungalow at the Beverly Hills Hotel, the pair “got naked + had sex,” according to McDougal’s written notes. Afterwards, ever the gentleman, Trump offered McDougal money.

McDougal says she saw Trump every time he was in Los Angeles, which “was a lot.” She says Trump flew her around the country for public events, but never paid for her travel directly, always preferring to reimburse her after she paid for it. Trump also promised to buy her an apartment, an offer he never followed through on.

The affair petered out because McDougal felt guilty about the affair and also because she was offended by comments that Trump made, including calling her mother “an old hag” and commenting that another woman who had a relationship with an African-American man “liked big black dick.”

McDougal’s description of the details of the relationship match those of Stormy Daniels. Just as interesting, however, is the effort to buy McDougal off.

McDougal decided in 2016 that she had a story that was worth some money. She ended up with American Media Inc., which publishes the National Enquirer, which paid her $150,000 for the rights to her story.

Which never ran, of course.

David Pecker, the inaptly named publisher, is a close friend of Trump’s. The idea of buying a story in order to ensure it never sees light of day is a favorite tactic of the tabloids, known as “catch and kill,” which can then use the story as leverage for bigger stories or better access from the celebrity in question.

McDougal says she was promised a fitness column in the Enquirer. Like the apartment, it never materialized.

How many more examples can their possibly be? And how much longer will the religious right turn a blind eye to Trump’s extramarital behavior? We don’t mean the sex, but the lying and cover up that seems to inevitably follow.

eating their own
8 comments