Truman Capote is remembered as a touchstone queer author of the 20th century with classics like Breakfast at Tiffany’s and In Cold Blood, a New York socialite (in a much less accepting landscape), and even for his childhood friendship with Harper Lee.

In his newest book, best-selling biographer Laurence Leamer lets us into Capote’s life through a new lens: the women with whom he surrounded himself through adulthood. From Babe Paley to C. Z. Guest, Gloria Guinness, and Pamela Churchill, Leamer unravels the glamorous stories and mercurial relationships Capote had with the women (often referred to as his “swans”) who inspired his never-finished final novel, Answered Prayers.

While guiding us through these Golden-Age, high-level relationships, Leamer also tells the familiar story of Capote’s transformation from a small-town boy to the famous writer he became. “As much as Truman projected an image of sophisticated worldliness, he was still in some measures that little boy from the Deep South come to the big city.”

Women like Babe Paley reflected Capote’s own charm back at him by inviting him into their alluring, privileged, high-class lives, while he let them into his enigmatic world of artists, writers, and intellect. It’s seductive, it’s magnetic, and it’s destined for chaos – and that’s exactly what Leamer delivers.

We spoke with Laurence Leamer about Capote, his swans, and what he wishes he could tell Capote now. 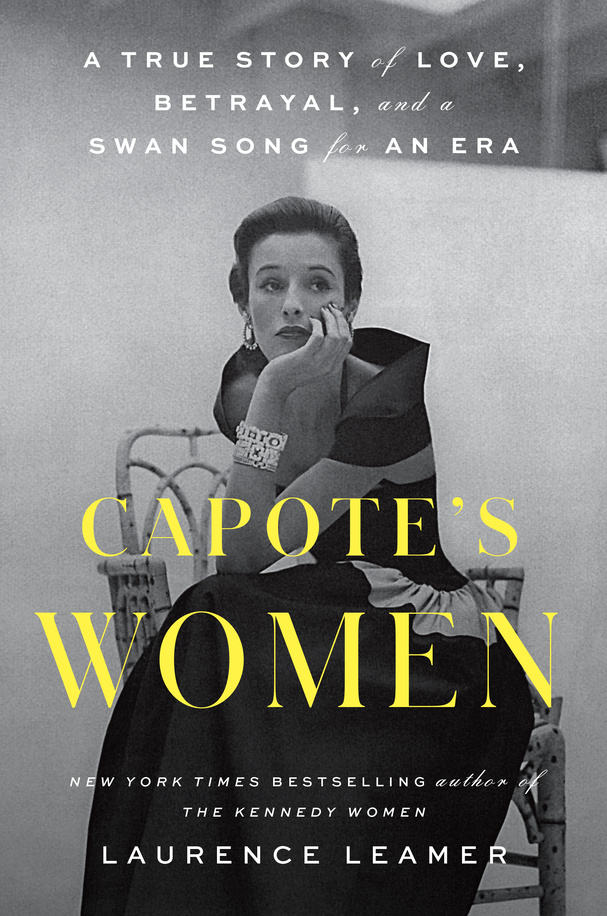 Coming from this little town in Alabama, not even with a real high school education, becoming one of the great writers of our time and writing these daring, brave books way ahead of their time…that’s living at the peak. And to do that, there are enormous risks. They were psychological, they were spiritual. And [Capote] took those risks, plus as a gay man.

Truman came out daringly…saying, “I’m a proud gay man.” He wasn’t political. He wasn’t really interested in politics, but his life was a political statement. And in any pantheon of gay heroes, this guy deserves to be at the top of the class.

What inspired you to write about Truman Capote through the lens of his relationships with these women?

I have a friend Susan Zirinsky … she’d just been named the president of CBS News and the first woman ever to be president. I thought, “What a life she has. I’ll write her story.” And she was debating if she wanted it done – I wasn’t going to do it unless she agreed. So, in the meantime, I was researching her life and CBS, and I read this biography of William S. Paley. And I read about Babe and I found out how glamorous she was. And…I started reading about these women. And it just was mind-boggling to me what their lives were like. In 1962 when I worked in Iowa, the young men, they wore jeans and t-shirts. And they wanted to be farmers like their fathers. The young women, they dressed up. They wanted something different.

What can we learn about Capote’s dynamics with these women that speaks to a broader dynamic between queer men and women?

How do you hope Capote’s Women sheds light on Capote in a new way?

I wrote a book 25 years ago called The Kennedy Women. And people were coming to me and said, “Gee, I read it, but I don’t see how a man could have written this. A woman had to write that book.” And I wrote [Capote’s Women], I hope, with gay sensibility…with a sense of style. And with a kind of acerbic take on things that is often called bitchy, but it’s not bitchy. It’s just looking straight on at life. I just think it’s so sad that we don’t see him as he truly was, his greatness. And I wanted to show his greatness. Yes, he failed in so many ways, but who doesn’t fail? We have to know him for his greatness, not for his failure, not for his drugs and dissipation.

When many people hear the title Capote’s Women, they’ll think of Harper Lee. How did you navigate incorporating their relationship into the book and their important background together?

She was an absolutely fabulous human being. When you think of it, starting out, she didn’t have any career at all. And before her novel was going to be published, she went with Truman out to Nebraska where he was investigating this murder of this family [for In Cold Blood]. Truman was a stranger to these people from a totally different world. And mind you, this is one of the extraordinary things about him. When I go somewhere, I’m a kind of chameleon. I try to be like these people. Not Truman. He goes out there. He’s this flaming guy. He’s got this long scarf down to the ground. He’s got these robes he’s wearing.

They’ve never seen anything like this in their lives. And she’s the one they can relate to. And she opens the world up to him and she does all kinds of research, and gives him about 150 pages of notes that have so much to do with the success of In Cold Blood. She didn’t write it. Some people say that she wrote it. No, no. But she was immensely helpful to him.

What surprised you the most as you wrote and researched Capote’s Women?

I guess that with money, with wealth, what people put up with, why they won’t leave these men that are making them so incredibly unhappy. Are they so afraid to be alone? Are they so afraid of being ostracized in this world that they’ll put up with some incredible things? It’s brutal. [William S.] Paley in his way was mostly brutal to his wife. Now, some of them, like C. Z. Guest and her husband, Winston Guest, they’re both from that upper-class world going back generations. And manners is their device to camouflage everything. They’re always incredibly polite with each other. They have staff always around them in the houses. So, they’re never really true to themselves and that protects them. And she knew that. She said once that, “Manners is the reason our marriage has survived.”

You mention in the acknowledgments of Capote’s Women that there was so much you wish you could have said to him. What would you say to him?

If I could have talked to him, I would say, “Truman, it’s not working out. Forget it. Go back, Truman, and tell the story of your failure to write this book. Write the story of these women and how you knew them and how it failed. Do that and you’d have your masterpiece.”