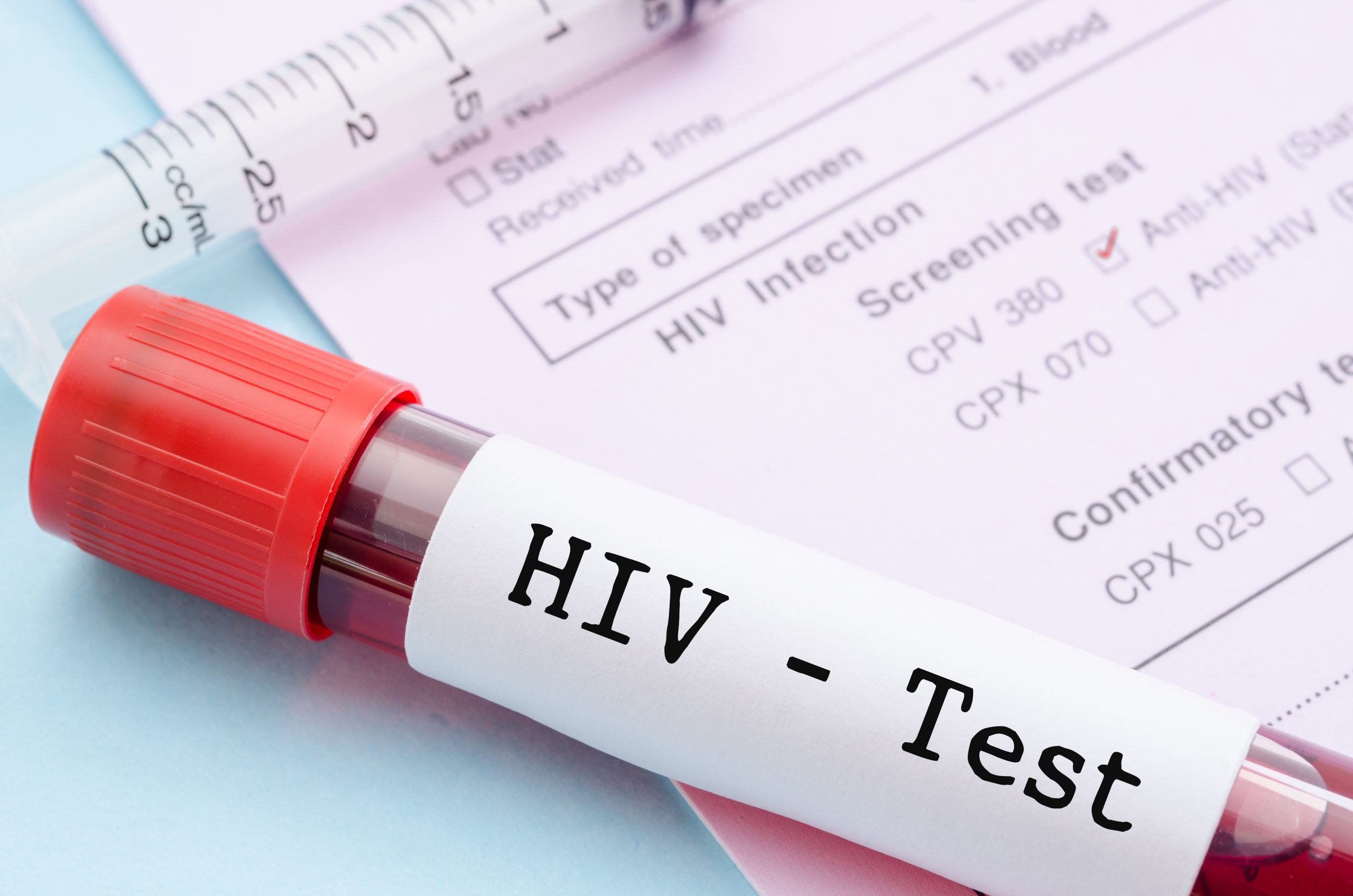 The gay men online who get off on seeking HIV infection (“bug chasers”) aren’t exactly known for their thoughtful introspection. After all, they are eroticizing something that works exactly once — and has life-long consequences.

So, a tweet posted a few weeks ago from a self-titled bug chaser stunned me with its honestly and vulnerability.

The Twitter account name is Bug Chaser [4.4k], with a profile that describes him as an “AIDS worshipper and death-dick glorifier.” His feed is definitely not for the squeamish, with images of biohazard tattoos, PrEP pills being discarded into a toilet, and so forth. Yeah. It’s a lot.

“A friend of mine’s boyfriend is currently in ICU,” read the post from December 30, 2019, “on the verge of dying from HIV, because the virus became drug-resistant. Currently thrown by this a bit, I’ll be honest.”

It was a bracing statement for someone belonging to such a stringent sexual sub-culture. The tweet even received some supportive responses, with people expressing their concern or discussing the real-life dangers of medication failure and even bug chasing itself.

Alas, the messages of sober reflection were not unanimous. Bug Chaser has thousands of followers,
and they are stubbornly devoted to their fetish.

“If he’s hot enough…” came a reply within minutes, suggesting the critically ill friend was ripe for some dangerous coupling.

Bug Chaser shot this response down immediately. “Not. The Right. Response. AT ALL,” he posted. 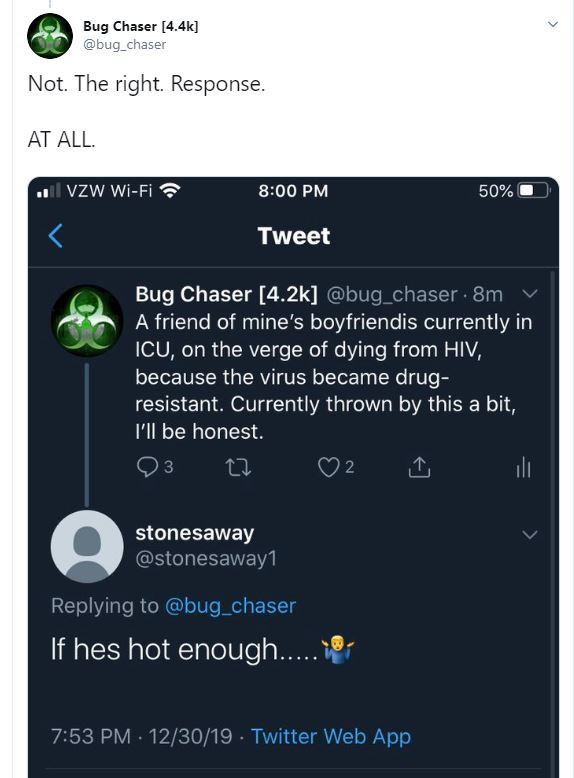 Bug Chaser then added another tweet to his feed, “I’m blocking anyone cheering about this, btw.”

And with that, Bug Chaser’s Twitter account went silent. There have been no further posts to date.

I have typically dismissed the entire notion of bug chasing, or at least relegated it to the dark corners of the internet, where anything is possible. Surely, these folks were either a) already HIV positive and simply prolonging their fantasy scenario, or b) fantasizing with no real intent on following through. And besides, anyone with the intention of becoming HIV positive would surely have been infected by now, right? How many new, HIV negative bug chasers can there actually be in the age of Prep and undetectables?

I was about to have my beliefs challenged and my mind blown.

I sent Bug Chaser a direct message. He responded and agreed to answer my questions. What I discovered was a human being with an admittedly perilous fetish who has pulled himself from the brink.

His uses the name “Jack” and wrote that he is a 33 year old gay man. Before answering my questions, he had some news of his own.

“I haven’t posted about it yet,” Jack wrote, “but my friend passed away a couple of hours before midnight on New Year’s Eve. Yes, that made me re-think some things.”

“Sero-discordant fucking still turns me on,” he continued. “However, I’ve decided I’m not actively chasing anymore and am back on PrEP full time. I will still enjoy sex with positive men but I’m going to take better care of my own status. I’ve just come to the decision that actively chasing a poz diagnosis is no longer for me.”

But had Jack actually, legitimately tried to become infected?

But there are limits, even for Jack, and the death of his friend created one.

“Learning about my friend’s illness and passing has certainly changed a few things for me personally, for sure,” he wrote. “I might be stopping the chase. At least for the time being. It’s certainly brought up feelings of conflict in me.”

For an HIV prevention advocate like me, any level of risk reduction is a positive step. As easy as it is to judge and shame people for their behaviors, we know from thirty years dealing with this epidemic that the only thing that benefits from our judgement is HIV. We must play the hand we are dealt, and work with every person taking risks to help mitigate them.

Even Jack acknowledged there are ways to pursue his fetish without risking infection.

“There’s absolutely a safer way of going about it,” he wrote. “Verbal absolutely helps. I get so turned on when a guy just talks about it during sex. If they’re on meds and you’re on PrEP, I’d say it’s still possible to have fun with it, for sure. I would likely still consider coming off of PrEP and getting f*ed by guys I know are on meds.” Jack contends he tested HIV negative in the last month, which was surprising even to him.

A former, active bug chaser who is now back on PrEP and is willing to engage with HIV positive guys who are on medication is, well, progress.

The anonymity of the internet could mean that all of this, every word, is total bullshit. It’s impossible to know what is true and what isn’t. But the sheer number of followers Bug Chaser enjoys, and the untold number of like-minded profiles that exist online, tell me that there is a sizable number of bug chasing fetishists out there.

And Jack, for all his worrisome behaviors and beliefs, did something laudable in a very public forum. He broke through the haze of fantasy and revealed his apprehensions. He is to change course.

For that, Jack deserves more than the compassion we would grant any other person struggling with HIV risk. For his public message that reconsiders his choices and gives permission for others to do the same, he deserves our thanks.

Mark S. King writes the blog My Fabulous Disease, which has just been nominated for a record-setting fifth consecutive GLAAD Media Award.