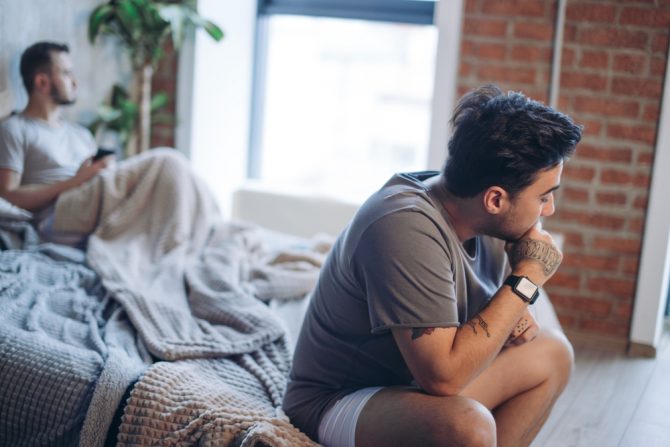 A gay man who hooked up with his straight best friend says it ended up being one of his biggest regrets in life, so he’s cautioning others from making the same mistake.

In an essay published by Men’s Variety, “Luke” says having sex with his friend “Dillon” in college was “one of the biggest mistakes I have probably ever made.”

“At the time I thought was a good idea because like most gay men, there’s always that one guy you have a crush on that happens to be straight,” he writes.

In hindsight, however, fulfilling that straight guy fantasy did irreparable damage to an otherwise great friendship.

Related: Straight guy decides to ‘make a go of things’ with his bisexual friend

Luke describes Dillon as looking like “Florian Munteanu, minus the tattoos” with “dirty blond hair, deep blue eyes his devilish laugh.” The two met while attending college together in Texas a few years ago.

Both guys were studying business administration. They had several classes together and even lived in the same dorm building. One night, they went to party at a frat house together.

“We had been to them before, usually with his girlfriend and some buddies in tow. But this particular evening it was just Dillon and me,” Luke writes. “His other half had been feeling sick and insisted he go anyway with me to have a good time.”

After drinking all night, they eventually stumbled back to Dillion’s dorm room at around 2 a.m. One thing led to another and pretty soon, they were naked in his bed together.

“It’ll be our secret bud,” Dillon told him. “Nobody has to know.”

Related: ‘Mostly straight’ guy thinks he might be falling for his roommate during quarantine

The next day, Luke says he noticed a “serious shift in our friendship.”

“Don’t get me wrong, we continued to be friends and hang out. It just wasn’t the same. I don’t know how to describe it except to say that he was more distant and less friendly.”

Eventually, they graduated college and fell out of touch. Today, Dillon is married with kids.

“And no, I wasn’t invited to the wedding,” Luke writes. “My sense is that had I not gotten with him, the two of us could have remained good friends for life.”

“We really did have a lot in common and genuinely liked one another. And he obviously knew that I had feelings for him based on what happened in his dorm that night.”

Looking back, Luke has this piece of advice for others who may find themselves in a similar situation: “Any of you reading this post who might be harboring fantasies about doing your straight best friend … please don’t.”

“Unless there are special circumstances, it will likely change your friendship forever.”