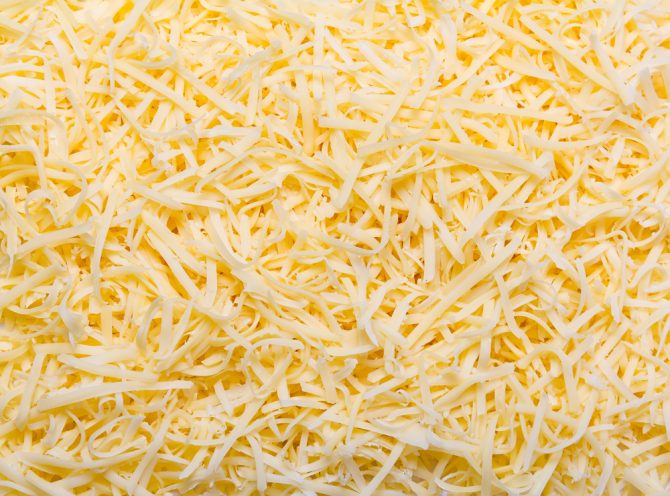 It’s not easy being a straight white couple in America these days.

When they’re not having to fend off peaceful Black Lives Matter protestors from their front lawns, they’re at war with chain restaurants over shredded cheese.

Last weekend, a husband shared a photo of his wife looking absolutely destitute inside a Tex Mex restaurant while she waited for shredded cheese to go with her fajitas that were getting colder by the minute.

“My wife, date night after 3+ months looked up on quarantine,” the man raged. “Waiting for shredded cheese as it’s the only way she can eat fajitas. We’ve asked 4 people, going on 18 minutes now. Just unreal at Allen, TX location. We gotta quit blaming #COVID19 for crappy service.” 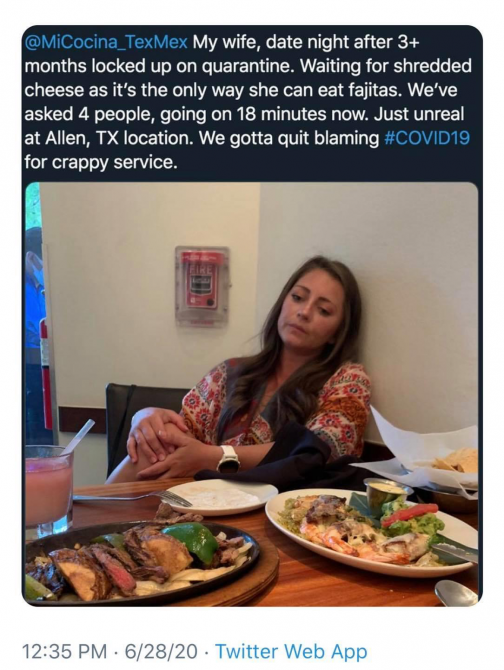 The tweet came from a since-deleted account called @jsv4, run by a man later identified as Jason Vicknair.

Though the account has been deactivated, the responses are still up for everyone to see.

The faces of national tragedy:
“Migrant Mother,” 1936 (by Dorothea Lange, FSA) and “But I Had To Wait For My Shredded Cheese,” 2020 pic.twitter.com/VLO0coSgMn

I know of one woman who lost her husband and both her parents to COVID-19 during the same week but this fajitas-without-cheese situation really puts everything into perspective.

For just 5 cents a day, you too can help a cheeseless person in need. Mi Cocina tried, now it’s your turn. #CheeseIsLife pic.twitter.com/fZxW12pM2s

Not having shredded cheese is a form of privilege, and it’s one we don’t talk about nearly enough.

Your 1st mistake was picking Mi Cocina. Your 2nd mistake was expecting shit to be as you think it should be. Your 3rd mistake is posting a picture of the most first-world-problem expression on your wife’s face and thinking anyone gives a shit. pic.twitter.com/Om4mlgWT9I

Guys, I have a screenplay idea, hear me out #18MinutesWithoutCheese pic.twitter.com/vwL9yJ7KjB

“125,000 Americans are dead but that’s nothing compared to the hell that is having to eat fajitas without shredded cheese.”#ShreddedCheese pic.twitter.com/ELfWqQUsg3

Seriously this is a lesson in Be-More-Prepared-and-Less-Pathetic!

The inside of my purse…
I never go #18minuteswithoutcheese pic.twitter.com/JkSpWdCD49

My god, I had no idea things had gotten so bad in Texas. No shredded cheese! Thoughts and prayers.

When you don’t get shredded cheese for your fajitas after asking 4 people: pic.twitter.com/RXXDwqh8uw

Many were quick to point out that Jason has quite a history of blasting businesses on Twitter.

Beginning to think this guy is kind of a fucking baby pic.twitter.com/rKSy8DqHEf

you tagged the business in the tweet just like the dozens of other businesses you’ve tagged. You meant to hurt them just like you did before. This time the whole world noticed how petty and mean you are.

I got a yelp review that said I ruined this guy and his gfs elegant evening by refusing to give them bread. I told them 5 times we were out. What was his elegant meal you ask? Mac n Chz and a side of Corn.

Others noted that, despite claiming to be locked down for “3+ months,” just one week earlier, Jason posted about being out on Father’s Day (and, of course, having a miserable time because of the bad service)…

First night out after 3 months in lockdown, eh?

you’re a bad liar and a complaint grifter pic.twitter.com/dLuqEoR9L8

No way these people quarantined for 3 months. They went to the Gaylord Texan for Father’s Day and have pics of their kids meeting their favorite athletes & swimming in a public pool. Not a mask in sight anywhere on this guy’s timeline. I feel so bad for the staff at Mi Cocina.

Looks like you were out & about last week for Father’s Day. ‍♀️https://t.co/7BHkvYcpbt https://t.co/wl8pIOp4wa

And then there was this little gem…

After his tweet went viral and his wife became internet famous, Jason spoke to the local blog Central Track about what happened.

“First, let’s get this out of the way,” he said. “It’s very normal to put cheese on fajitas.”

He then insisted that he and his wife are “pretty happily married” (so long as there is always shredded cheese nearby), but that she’s “pissed” her photo went viral.

“She said, ‘Why would you put this picture of me on Twitter?'”

Jason added that he appreciates everyone in the service industry, even if his past tweets don’t show it; however, the service at Mi Cocina on Saturday night was “bad.”

Asked if the shredded cheese ever arrived at the table, Jason said it did, “probably a couple minutes after” he sent his now infamous tweet.