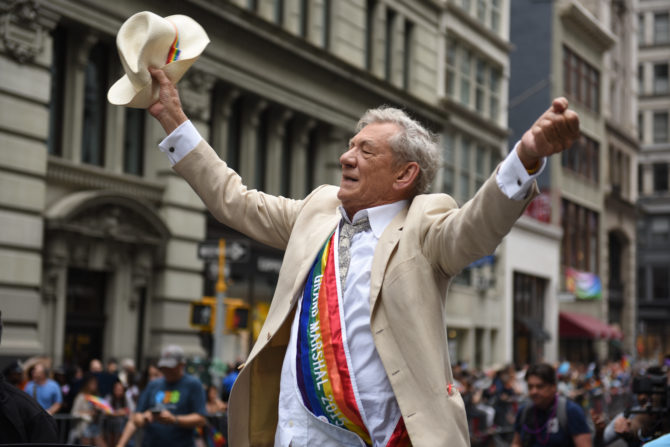 Sir Ian McKellen has spent his life off-screen pressing ahead for LGBTQ rights. Earlier this year, he shared his wish for the future of gay people: that they stand alongside transgender people in solidarity.

In a TikTok chat with Olly Alexander, promoting Alexander’s new series It’s a Sin, McKellen noted how far the queer community had come, and the striking parallels between the discussion of transgender people in the present day, and the discussion of gay men at the height of the AIDS crisis.

“I do hear people – gay people – talk about transgender people in very much the same terms as people used to talk about your common or garden gay,” McKellen told Alexander.

“The connection between us all is we come under the queer umbrella – we are queer. I quite like being queer actually. The problems that transgender people have with the law are not dissimilar from what used to be the case for us, so I think we should all be allies really.”

hello !! i’m going LIVE this on @tiktok_uk today at 6pm (GMT) with the very legendary @IanMcKellen for a conversation about LGBTQ+ history month, It’s A Sin and some of the history of HIV and AIDS. Please come join us!!! I’m so excited to chat with Ian ??? pic.twitter.com/CfV0foE8W8

Of course, McKellen speaking his mind about queer issues is nothing new.

The actor came out publicly in 1988, in large part to raise public awareness about Section 28, which was then under consideration in the British Parliament. If passed, the law would have prohibited promotion or discussion of homosexuality as healthy.

Though Parliament did ratify Section 28, that didn’t deter McKellen from co-founding the British gay activist group Stonewall, or from participating in other queer-rights organizations.

McKellen has always said he sees his activism, both for gay rights and other causes, as a moral imperative, regardless of any damage it could do to his acting career.

“I have been reluctant to lobby on other issues I most care about—nuclear weapons (against), religion (atheist), capital punishment (anti), AIDS (fund-raiser) because I never want to be forever spouting, diluting the impact of addressing my most urgent concern; legal and social equality for gay people worldwide,” the actor wrote on his website in 2008.