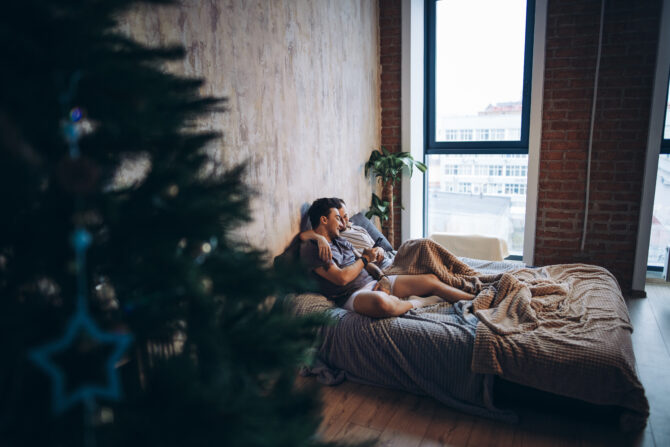 The holidays aren’t always easy for queer people. And that’s what makes gay Christmas movies all the more comforting. After a long hard day of dealing with (or barely acknowledging) your family, there’s nothing like snuggling up next to someone you love and binge-watching a feel-good flick.

World of Wonder also recently announced that it will be releasing “the draggiest Christmas movie ever made” with The Bitch Who Stole Christmas. Starring 20 RuPaul’s Drag Race alums, including Mayhem Miller, Gottmik, Heidi N Closet, and Ginger Minj, the film includes just about every holiday movie trope, from a Christmas-obsessed small town to a “Winter Ball” competition to an evil plot to destroy Christmas “fore-evah!”

Lifetime, on the other hand, is giving us some lesbian representation with Under The Christmas Tree, an enemies-to-lovers tale about a marketing whiz and Christmas tree whisperer who initially butt heads over – you guessed it – the perfect tree. The pair fall head over heels with the thanks of some good old Christmas magic. Under The Christmas Tree will be Lifetime’s first ever lesbian romance set during the holiday season.

But if you’re in a rush to start bingeing Christmas flicks even before December rolls around, you don’t have to wait for these new releases. In this list, we go over some of the most iconic gay and lesbian Christmas movies to hit the big (and small) screens in recent years.

Dashing in December starts with the Christmas-y-est trope known to man when workaholic Wyatt (Peter Porte) goes home to his family’s ranch in Colorado. Wyatt’s intention for coming home is to convince his mother to sell their ranch, but his plans are derailed when he meets the charming ranch hand Heath (Juan Pablo Di Pace).

If you’ve already seen this flick and are looking for another “city slick who comes home to the family ranch and gets a reality check” type of Christmas movie, look no further than Tello’s Christmas at the Ranch. It’s got more or less the same plot, but it’s packaged as a lesbian love story this time.

If you’re one of the many queer dudes who had a crush on Mean Girls’ Jonathan Bennett, The Christmas House is just the right movie for you. In the film, Bennett plays queer baker Brandon, who comes home to his parents’ (Sharon Lawrence and Treat Williams) house with his husband Jake (Brad Harder). Brandon, Jake, and Brandon’s brother Mike (Robert Buckley), are tasked by their parents to transform the family home into “the Christmas house” one last time.

The Christmas House is the first time the Hallmark Channel has prominently featured a gay couple in movie. It was commended for its positive portrayal of Brandon and Jake’s relationship, as well as Jake’s relationship with Brandon’s family.

This lesbian Christmas movie is co-written and directed by Clea DuVall, who is perhaps best known for her role in the cult queer classic But I’m A Cheerleader. This gay Christmas movie from Hulu follows lesbian couple Abby (Kristen Stewart) and Harper (Mackenzie Davis) as they visit Harper’s hometown over the holiday season.

The only problem is that Harper never really came out to her family! As Harper tries to navigate the situation and avoid her family’s judgment, things get more and more complicated for the pair.

The film is carried by a hilarious ensemble cast featuring the likes of Alison Brie, Aubrey Plaza, Dan Levy, and Victor Garber and has some really good standout moments. However, it’s gotten its fair share of critiques for relying on some really tired tropes. Harper’s constant lying to her family about Abby would set off major red flags if the film wasn’t packaged as a feel-good romantic comedy.

Based on the YA novel by John Green, Maureen Johnson, and Lauren Myracle, Let It Snow is kind of like a modern day Love, Actually wherein a handful of teenagers experience love and heartbreak throughout one Christmas Eve. One of those teens is Dorrie, a Waffle Town waitress who runs into Kerry, a closeted popular girl with whom she had hooked up with. The lesbian storyline isn’t the main plot, but the rest of the characters’ stories are just as enjoyable anyway.

Let It Snow is another one of those iconic Christmas movies that is helmed by a great cast, including Kiernan Shipka, Liv Hewson, Jacob Batalon, Joan Cusack, Anna Akana, and D’Arcy Carden.

A post shared by let it snow movie (@letitsnownetflix)

The Christmas Setup follows lawyer Hugo (Ben Lewis) as he returns home to his mother Kate’s (Fran Drescher) house for the holidays. Kate, in classic Fran Drescher hilarity, gets all up in Hugo’s business and sets her son up on a date with his high school crush, Patrick (Blake Lee). The result is an awkward, funny, and touching gay romance.

The Christmas Setup is the first gay christmas movie on Lifetime. The film received positive reviews from critics and audiences, and was also nominated for a 2021 GLAAD Media Award for Outstanding TV Movie.

Based on the novel The Price of Salt by Patricia Highsmith, Carol depicts the forbidden romance between Therese (Rooney Mara), an aspiring young photographer, and Carol (Cate Blanchett), an older woman in the middle of a bitter divorce.

Set in New York City in the early 1950s, Carol is a lot different from the other holiday movies on this list in terms of tone and mood, as the two main characters must find ways to subtly express their feelings for one another without drawing suspicions.

Carol is regarded as one of the best lesbian movies ever made and has several Oscar and BAFTA nominations under its belt. It also ranks in the British Film Institute’s best LGBT films of all time, particularly for its positive portrayal of love between two women.

Though not a lesbian Christmas movie per se, the events of Carol are set between the days before Christmas and early January. As such, many queer women have turned watching this lesbian movie into a new Christmas tradition.

Whether you like it or not, holiday movies are often formulaic and predictable. For some people, this trait is what makes them so comforting. So if you’re into that, you’ll probably enjoy this movie, which shares pretty much the same plot with Happiest Season.

Starring Keith Jordan and Adamo Ruggiero, Make the Yuletide Gay is about a college student who is out at school but not to his parents. During the holidays, his boyfriend surprises him at his parent’s home. Rather than fess up, he leads everyone to believe that they’re just roommates.

Not a fan of the typical cheesy romantic lesbian Christmas movies? Anna and the Apocalypse doesn’t have any of those typical holiday movie tropes. No whirlwind hometown romance, no romantic sparks under a beautiful enchanting tree, no awkward Thanksgiving Dinner. Instead, Anna and the Apocalypse is a zombie Christmas musical featuring badass queer characters who are dead set on saving their friends.

A post shared by Anna And The Apocalypse (@aatapocalypse)

Okay, A New York Christmas Wedding isn’t exactly the best Christmas movie out there. But hear us out – it’s one of those “so bad it’s good” types of movies.

The story revolves around Jennifer (Nia Fairweather) who is overwhelmed by her soon-to-be mother-in-law’s insistence that she have a Christmas Eve wedding. After a chance encounter leads her to cross paths with her guardian angel, Jennifer wins the Christmas lottery – she’s granted a wish to see what her life would have been like if she had gotten together with her childhood best friend.

It’s very much a modern take on A Christmas Carol, only this time Ebenezer Scrooge is a lesbian woman who regrets not living a more truthful life.

Queer representation in holiday movies – or any movies for that matter – used to be so rare that we would celebrate even the smallest of gay bit characters. But today, we’ve got gay holiday movies popping up left and right and coming out of mainstream streaming services for that matter. If that won’t turn your holidays merry and bright, we don’t know what will!

RELATED: Guys list the gayest Christmas gifts they’ve ever given or received