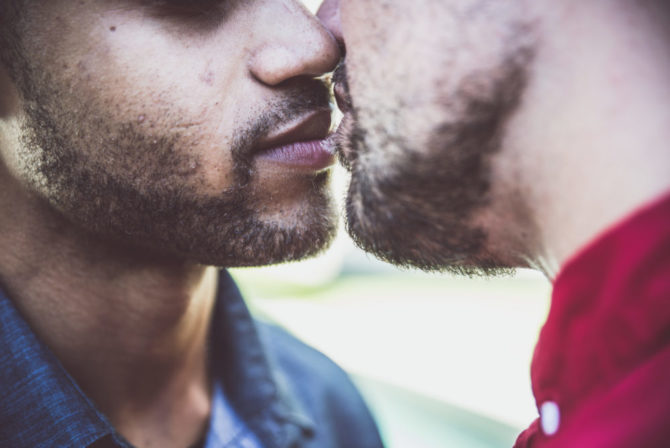 It is possible for a guy to be “mostly straight”?

“To the uninitiated, mostly straight may seem paradoxical. How can a man be mostly heterosexual?” Savin-Williams writes in an article published by TIME. “Yet the evidence suggests that more young men identify or describe themselves as ‘mostly straight’ than identify as either bisexual or gay combined.”

Savin-Williams points to a government poll conducted in 2011-2013 found that 6% of men ages 18-24 years old described themselves as being attracted to “mostly the opposite sex.” When asked to choose a label–straight, bisexual or gay–around three-quarters of the men said they were straight because they believed the term “bisexual” seemed “too gay” to accurately describe themselves.

For his book, Savin-Williams spoke to a motley crew of these “mostly straight”-identifying young men to try and better understand their way of thinking.

The mostly straight man belongs to a growing trend of young men who are secure in their heterosexuality yet remain aware of their potential to experience far more. … Perhaps he’s made out or he wants to make out with a guy friend. He’s participated in all-male group masturbation or is willing to receive oral sex from an attractive guy he’s just met. But it’s unlikely that he has had penetrative sex with a guy, though he might be willing to if the right guy or circumstance appeared. He might have had an intense guy crush. But to fall passionately in love with a guy is too much, though he might have quite strong feelings and cuddle with a best friend.

In short, Savin-William says, same-sex attraction only makes up about “5% to 10% of his sexual and romantic feelings.” The remaining 90-95% is devoted to the opposite sex.

It’s a similar conclusion drawn by author Jane Ward in her 2015 bestselling book Not Gay: Sex Between Straight White Men and Tony Silva in his 2016 study Bud-Sex: Constructing Normative Masculinity Among Rural Straight Men That Have Sex With Men who both agree men can engage in homosexual behavior from time to time and still identify as straight.

“If we’re thinking of bisexuality or homosexuality as purely technical descriptions of sex acts and not sexuality identities, then yes, whenever somebody is engaged in homosexual sex we could say that it’s homosexual,” Ward told Queerty in a 2015 interview.

But, she added, “when straight-identified people engage in homosexual sex and they have no interest whatsoever in bi identification or gay identification … then it’s actually most useful to say these people are straight.”

Savin-Williams seems to have a similar belief. A “mostly straight” man, he writes, is “not an equal opportunity bisexual in disguise trying to hold out hope for straightness.” Nor is he “transitioning toward identifying as bisexual or gay” or “a closeted gay man who fears being gay yet wants to keep a slight, perhaps secretive, gay side by dangling his potential for guy sex.”

He may retreat from a full identification with heterosexuality, but rarely does he gravitate toward bisexuality, and almost never does he move toward homosexuality of any sort. Thus, he is a closer cousin to straight guys than to traditional bisexual guys.

You can read Savin-Williams’ the full article HERE. His book, Mostly Straight: Sexual Fluidity Among Gay Men, is available through Harvard University Press.