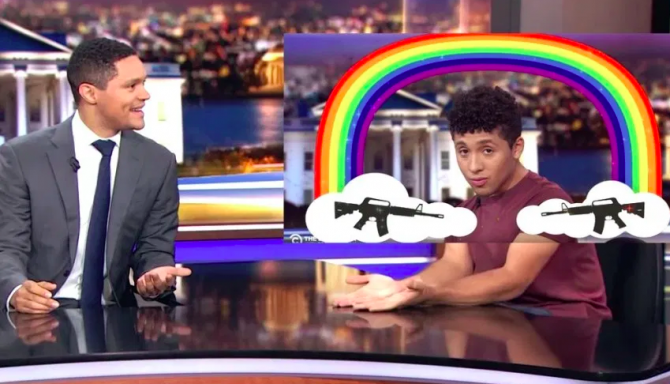 This week, Young-White used that recent study about how straight dudes don’t like to recycle because they think it makes them seem gay, then argued the same toxic masculinity could potentially sway would-be mass shooters into not massacring people.

To which, Young-White responded, “Easy. We just need to make guns gay.”

He went on to say this couldn’t be difficult since guns are already a little bit gay by nature, “Right off the bat, guns are what? Long, hard, [and] the best ones are black.”

“And where do people keep their guns, Trevor? In the closet.”

Makes sense to us!

“I get what you’re trying to do,” Noah replied, “but for Americans who own firearms, guns aren’t just like guns. They’re a community of masculine hunters and freedom fighters.”

“Yeah, and we need to point out how gay that sounds,” Young-White countered. “Like, the right to bear arms? I love bare arms, too … Even the names of gun laws sound gay. Concealed carry? That’s like every username on Grindr. The law might as well be called, ‘Assbreaker37.’ And Stand Your Ground? That sounds like a Kelly Clarkson gay anthem.”

“You’re going to make guns gay,” Noah said. “So then straight men won’t want them anymore, so they’re going to give the guns to gay people, and gay people are going to hand them over to the government.”

“No, no, no,” Young-White replied. “Gay people keep the guns, and then we run the country. You know what I’m saying?”