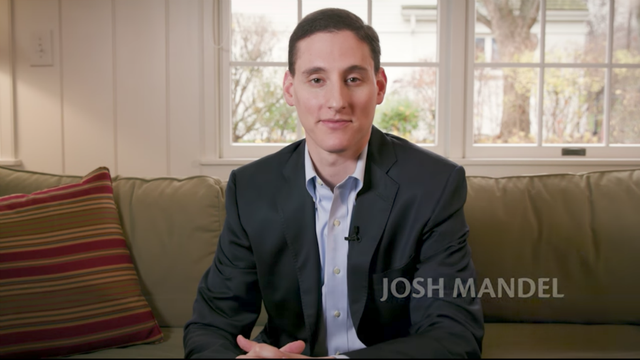 Former Ohio Treasurer Josh Mandel announced in February that he will seek the Republican nomination to replace retiring Senator Rob Portman next year. Unfortunately for him, nobody in the Republican party wants anything to do with him.

The 43-year-old was recently “escorted out” of a Republican gathering at a hotel in Florida, Axios reports.

The embarrassing incident happened at a fundraising retreat hosted by the Republican National Committee at the Four Seasons Resort in Palm Beach. In attendance was one of Mandel’s GOP primary opponents, Jane Timken.

Mandel showed up to the hotel without a booking or an invite in an apparent attempt to steal attention away from Mandel and rub elbows with high profile donors. He succeeded at drawing attention to himself, but we’re guessing it wasn’t in the way he had intended.

The invitation-only event is taking place at the Four Seasons Resort, and the RNC reserved the entire hotel. While Timken, former Ohio GOP chair, was invited to the event “because she is a major donor” — Mandel was not, so he was asked to leave, according to one of the sources.

Despite not having his name on the list, Mandel seized on the opportunity to get some face time with top Republican donors while they all were in one place, one source familiar with his plans told Axios.

But when the first event formally kicked off at the hotel Friday night, Mandel and others who did not have credentials were asked to leave.

Mandel has never demonstrated the best judgement when it comes to, well, anything.

He has a long history of cozying up to bigots, particularly alleged white nationalists and Nazi aficionados.

In 2017, he attacked the Anti-Defamation League for listing alt-right activists Jack Posobiec and Mike Cernovich in a report about hateful extremists. And in 2011, he refused to return a $1000 campaign donation from a longtime Nazi reenactor, calling the whole thing a “manufactured nonissue.”

Adding a layer of weirdness to the matter is the fact that Mandel himself is Jewish.

Then there was the time in 2012 when nine of his family members took out an ad in their local newspaper blasting him for his antigay views, which include opposing same-sex marriage, voting against extending employment non-discrimination protections to LGBTQ people, and supporting the reinstatement of the “Don’t Ask, Don’t Tell” policy.

Adding yet another layer of weirdness to the matter is the fact that Mandel himself has two gay cousins, one of whom served in the military.

A spokesperson for the RNC declined to comment on the Axois report and Mandel’s team never responded to requests for comment on being kicked out of the event, but Twitter sure has a lot to say about it…

I'd love to see a video of @JoshMandelOhio getting kicked out of this event. https://t.co/gnHiL7dAWR

Obviously not elite enough for the clueless cult.

What kind of asshole do you have to be to get kicked out of a meeting of assholes?https://t.co/OQrSOy8sQ9

So this republican was canceled by other republicans?

Josh Mandel got kicked out of the RNC retreat because he’s a broke boy! ?#PoorJoshMandel pic.twitter.com/pHXYqSZj9K

Josh Mandel is a health hazard to everyone around and should be isolated. Even the RNC gala escorted him out.

He tried to gatecrash an event and was chucked out. The issue is his behaviour here, not a great way to attract donors

This the same Josh Mandel that was escorted off the premises of the RNC retreat… last night?