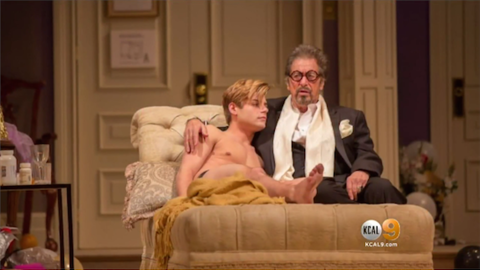 CBS’s Juan Fernandez is a journalist who’s not afraid to ask the difficult questions and pulls no punches.

Sitting down with Garrett Clayton, Fernandez grilled the actor about his latest role in God Looked Away, in which he plays one of Tennessee Williams’ boytoys; a teenage runaway named Luke. (The playwright is played by noted scenery-chomper Al Pacino.)

“Many actors and actresses have to bear it all to get into character,” Fernandez begins, “and that’s literally true for Garrett Clayton in the new stage production God Looked Away…”

“You’re in your underwear a lot,” Fernandez notes, roughly a minute and a half into the interview. “What’s that like? I mean, I know that on a movie set it’s a little different, but on stage, the audience is there…? What’s it like for you?”

“I think it would be a bit more of a struggle if I wasn’t comfortable with myself,” Clayton giggles. “But I’m fine with it; everybody has a body and I’m just in my underwear on stage, it’s fine.” 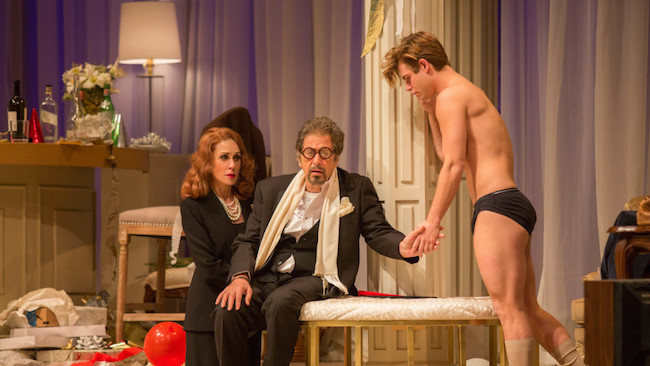 “Why is Luke in his underwear?”

“Why? Oh… I don’t want to give away the plot. Maybe in the first act, a joke happens, or… in the second act, it’s plot-driven a lot more, but I’m worried about giving too much away.”

So there you have it.

Later on, Clayton talks about his actorly “process” and what it’s like to work with Pacino. (It’s an honor.)

You can watch the slightly peculiar interview here.