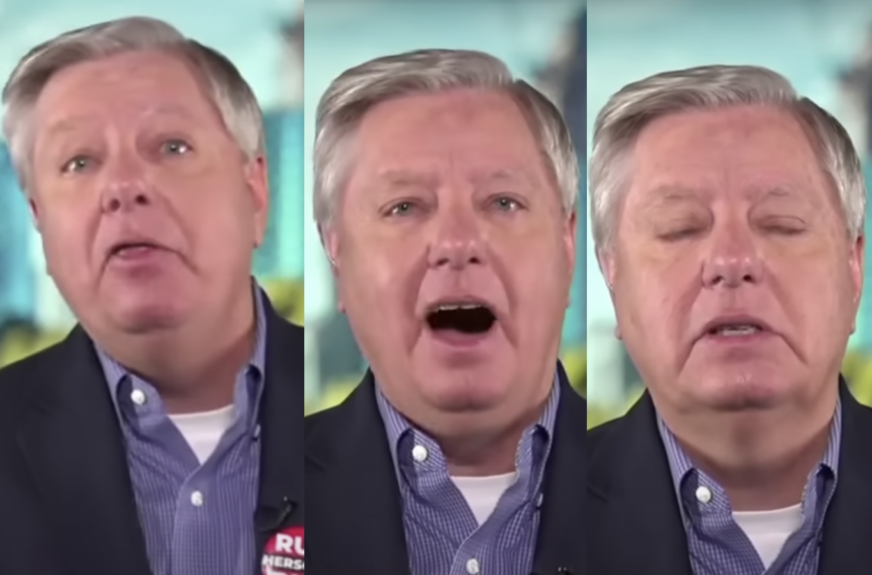 Lindsey Graham went on Fox News on Friday to warm viewers that “it’s just a matter of time” before a dangerous terrorist wanders across the southern border and into the United States and kills bunch of Americans.

Title 42 is a Trump-era policy that saw hundreds of thousands of migrants trying to enter the country at the U.S.-Mexico border turned away by Border Patrol in an effort to curb the spread of contagious disease.

The Biden administration initially tried to end the policy back in May, but a lawsuit filed by 21 Republican-led states and overseen by a Trump-appointed judge in Louisiana slowed things down. It’s now scheduled to expire on December 21.

“It’s just a matter of time until somebody comes across that border and kills a bunch of Americans because they’re a terrorist,” Graham warned Faulkner, adding that Border Patrol agents feel “abandoned” by President Biden.

“They’re seeing human trafficking at a level I’ve never seen,” he continued, without providing any evidence to support his claims. “They’re overwhelmed with illegal immigrants coming in. People on the terrorist watch list are going right through!”

For the record, the last part isn’t true. People on the terrorist watch list are not being knowingly waved through the security line at the U.S.-Mexico border by depressed Border Patrol agents.

Graham, who recently testified before a grand jury investigating Donald Trump‘s alleged efforts to overturn the 2020 presidential election results in Georgia, continued, “So, to be a Border Patrol agent under Biden is one of the most miserable experiences I can imagine. To be in charge of protecting America, and the administration you work for will not give you the tools to do your job is very bad for morale.”

But the fear-mongering, gay-hating senator didn’t stop there. In fact, he was only just beginning.

“It’s just a matter of time before terrorists that are rising in Afghanistan and Syria will make their way through the border to attack us! Their desire to attack us hasn’t stopped!”

“Biden has surrendered the border!”

Graham went on to say that Title 42 expiring will throw “gasoline on the fire” of this imagined border crisis.

“The Biden administration took all the border security measures of the Trump administration and changed them overnight,” he said, urging House Republicans to hold hearings once the new Congress takes over in January and “put on the table impeaching people responsible for this.”

Will voting for Hershel help that?

They can fly in whenever they want.
The 9-11 bombers were here on visas, genius.

You’ve had more that SIX HUNDRED mass shootings this year my dude….

There was already quite a few here who showed up at the capital on January 6. What are we doing about those guys?