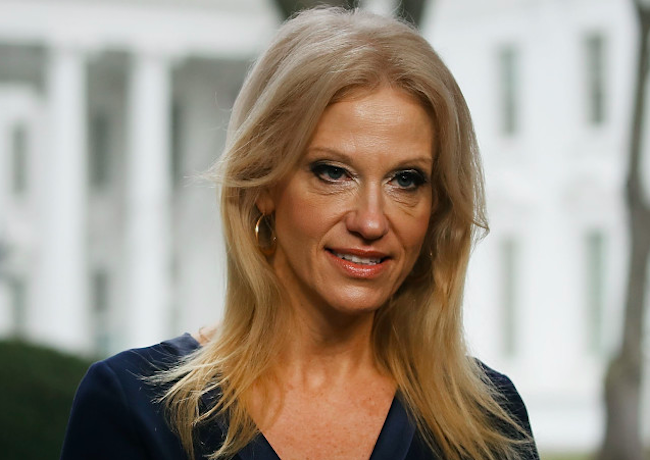 On Wednesday, CNN reported Kellyanne Conway was yanked off the air for a week following a long spate of unfortunate television appearances; a claim the White House categorically denies.

Thus far, Conway’s greatest hits have included her prodigious use of what she calls “alternative facts” (i.e., lies) and her bizarre, highly inadvisable on-air plug for Ivanka Trump‘s fashion line.

But what reportedly sent the White House over the edge was the bedraggled Counselor’s claim that National Security Adviser Michael Flynn had the “full confidence” of Donald Trump mere hours before he was fired.

An anonymous source told CNN that Conway was barred from making any more television appearances over the next seven days since she was “off message.”

Another source claimed Conway was taken off the air to help the administration have “much more of a drama-free week.”

Since the Flynn incident, Conway said she planned on making far fewer television appearances, but these are the first reports that claim she’d been altogether pulled off the air.

She’s already been barred from several cable news programs, including CNN’s State of the Union and MSNBC’s Morning Joe over credibility issues, as Raw Story reports.

“I’ve been invited on shows every day, including two Sunday shows,” Conway told CNN in an update. “I’m trying to focus on other pieces for my portfolio.”

This makes sense, as we often start tinkering with our portfolios when we start to suspect we’ll soon be out of a job.

Dylan Byers, the reporter who wrote the original story, clearly isn’t buying it:

Alas, it is true. She hasn’t been on TV for over a week. Fact they might put her back on TV at some point doesn’t change that. https://t.co/jlSoixx5Fc

You do have to admire the White House press strategy… Don’t respond til after the story posts, then do something to imply it’s not true…