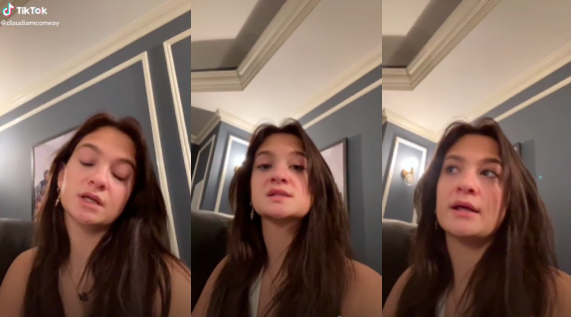 Kellyanne Conway‘s ongoing family drama has taken yet another cryptic turn after her estranged husband, George, shared a recorded statement, which many are describing as a “hostage video”, made by their daughter Claudia about that topless photo shared on her mother’s Twitter page yesterday.

Quick backstory: The illicit photo of the 16-year-old briefly appeared on Kellyanne’s page, which has over 3 million followers, Monday evening. It was only up for a short while before being yanked down. Claudia later confirmed the photo was authentic but said she didn’t know exactly how her mother got her hands on it.

Kellyanne hasn’t issued any comment on the matter, and Twitter says it’s still investigating what happened, but earlier today, George tweeted a video from Claudia’s TikTok page, along with the caption, “Our daughter Claudia asked me to tweet this statement for her.”

Our daughter Claudia asked me to tweet this statement for her. https://t.co/ilH7IFqERB

At the very top of the video, Claudia tells viewers that what she’s saying “isn’t forced” and is “coming completely from me.”

“I have faith and I know that my mother would never put something like that on the internet, as well as me, we would never do that,” she says, adding that, while she and her mother fight at times, “I do love her.”

She then says she plans on taking another break from social media because her family is “tired of being headlines” and because it’s only causing problems in her relationship with her mom.

She concludes by urging people to please stop “inciting hate” and sending the authorities to their home.

please stop sending hate to my family. please. i am putting an end to all of this. i’m okay. we are okay.

Last week, police showed up at the Conway’s house after Claudia posted a series of disturbing TikTok videos accusing her mother of physical and verbal abuse. In one of the clips, Kellyanne is heard calling her an “ungrateful bitch” and threatening, “You’re never gonna record another f*cking thing in your life!”

Earlier this month, Claudia alleged that her father had walked out on his wife and children and “wants nothing to do with our family.” Shortly after that, she announced she was selling all his stuff on Ebay.

George may have hoped that sharing his daughter’s TikTok video would help defuse the situation. Unfortunately for him, it only seems to have heightened people’s concerns about Claudia’s safety and the alleged abuses happening inside the Conway household…

No one’s buying this hostage video. You and your garbage wife @KellyannePolls are sick child abusers https://t.co/8yA35gpzBj

Your wife needs to go to fuckin jail dog https://t.co/MJ5MvXPNq2

Gross. That’s an absolute hostage video. Mothers and daughters do NOT fight like that. Absolutely disgusting, @gtconway3d and @KellyannePolls. https://t.co/tn2Nz3hrT5

When a victim who lives with their abuser suddenly goes quiet after the abuser posts their nudes on social media, AFTER previously threatening to kill said victim, it’s not by choice. #claudiaconway is still in danger under @KellyannePolls roof. George is probably complicit. https://t.co/TSwdPuZzEg

This is like a hostage video. #ClaudiaConway needs REAL HELP from both @gtconway3d & @KellyannePolls https://t.co/x7K1HVnVEe

It doesn’t matter whether or not Kellyanne’s Twitter / phone was hacked. Why would she have a topless photo of her daughter on her phone? That is beyond fucked up. May you rot in jail, @KellyannePolls.#claudiaconway https://t.co/sAZTVtphCn

I don’t think that @KellyannePolls tweeted the photo intentionally, but she is still a lousy and emotionally abusive mother. https://t.co/4Ho7uJ5005

how come @claudiamconwayy has to make a hostage video apologizing to @KellyannePolls becuase her mom posted a naked photo of her, but there is nothing from Kelly apologizing to her daughter for the horrendous thing she has done to her? Kellyanne is disgusting #justiceforclaudia