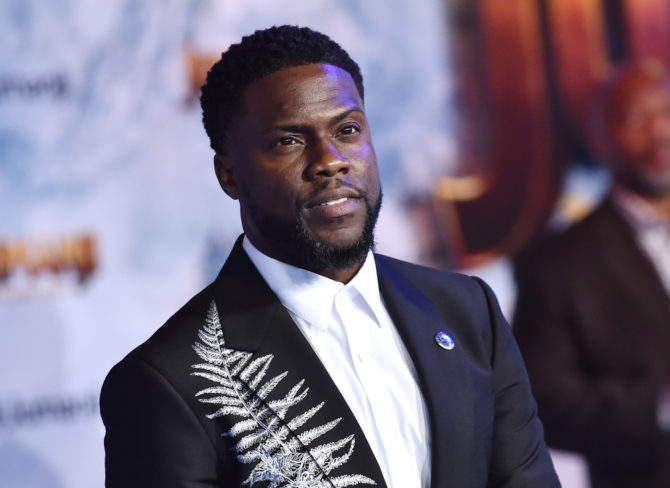 It’s been two and a half years since his homophobic Oscars fiasco, and Kevin Hart is still talking about it.

The comedian is currently promoting his upcoming Netflix film Fatherhood. In an interview with the Sunday Times, he once again talked about the backlash he received in 2019 over homophobic tweets he wrote years earlier, resulting in him stepping down from hosting the Oscars. And, despite saying he’s over the whole thing, it sure sounds like he still have some hard feelings.

“If somebody has done something truly damaging then, absolutely, a consequence should be attached,” Hart told the newspaper. “But when you just talk about… nonsense? When you’re talking, ‘Someone said! They need to be taken [down]!’ Shut the f*ck up! What are you talking about?”

The “nonsense” he is referring to is the backlash he received over tweets he wrote that included AIDS jokes and homophobic slurs like “f*g boy”, “gay face”, “fat faced f*g”, and “man bitch”, as well as repeated use of the phrases “no homo” and “no homo gay”.

“When did we get to a point where life was supposed to be perfect?” Hart continued. “Where people were supposed to operate perfectly all the time? I don’t understand.”

“Last I checked, the only way you grow up is from f*cking up. I don’t know a kid who hasn’t f*cked up or done some dumb sh*t.”

Now, that’s definitely true. People are allowed to make mistakes and should be allowed to learn from those mistakes. The problem is, Hart didn’t seem to learn from his, which is why so many people continue to be frustrated with him.

After his homophobic tweets resurfaced, he initially refused to apologize, claiming he’d already done so, even though he hadn’t. Then he went on Ellen’s show to accuse people of trying to sabotage his career simply because they were holding him accountable for his past bigotry. And then he attacked the LGBTQ community for being too “sensitive.”

After that, he disappeared for a while. But a few months later, he kicked the hornet’s nest when he got into a spat with Little Nas X, expressing confusion over why the singer felt a need to come out and saying he didn’t believe he ever experienced homophobia growing up gay in the projects.

.@lilnasx speaks the truth about his choice to come out while at the top. More of The Shop on @HBO now! pic.twitter.com/wETNaPUU5t

Asked by the Sunday Times whether he was upset about being “canceled”, Hart said no.

“I’ve been canceled, what, three or four times?” he said. “Never bothered. If you allow it to have an effect on you, it will. Personally? That’s not how I operate.”

Then he compared him being canceled for making antigay remarks to a person being sent to prison.

“It’s like jail. People get locked up so they can be taught a lesson. When they get out, they are supposed to be better. But if they come out and people go, ‘I’m not giving you a job because you were in jail’ — then what the f*ck did I go to jail for? That was my punishment.”

He continued, “How do you not give those people a shot? They’re saying that all life should be over because of a mistake? Your life should end and there should be no opportunity to change? What are you talking about? And who are you to make that decision?”

Hart went on to say that people should be able to “disagree” without completely destroying one another.

“If there’s a message to take from anything I’ve said, it’s that in this world of opinion, it’s OK to just disagree,” he told the paper. “It’s OK to not like what someone did and to say that person wasn’t for me. We are so caught up in everybody feeling like they have to be right and their way is the only way.”

Another true statement. Except that homophobia, like racism, xenophobia, misogyny, and all other forms of bigotry, is merely a difference in opinion.

“If people want to pull up stuff, go back to the same tweets of old, go ahead,” he continued. “There is nothing I can do. You’re looking at a younger version of myself. A comedian trying to be funny and, at that attempt, failing. Apologies were made. I understand now how it comes off. I look back and cringe. So it’s growth. It’s about growth.”