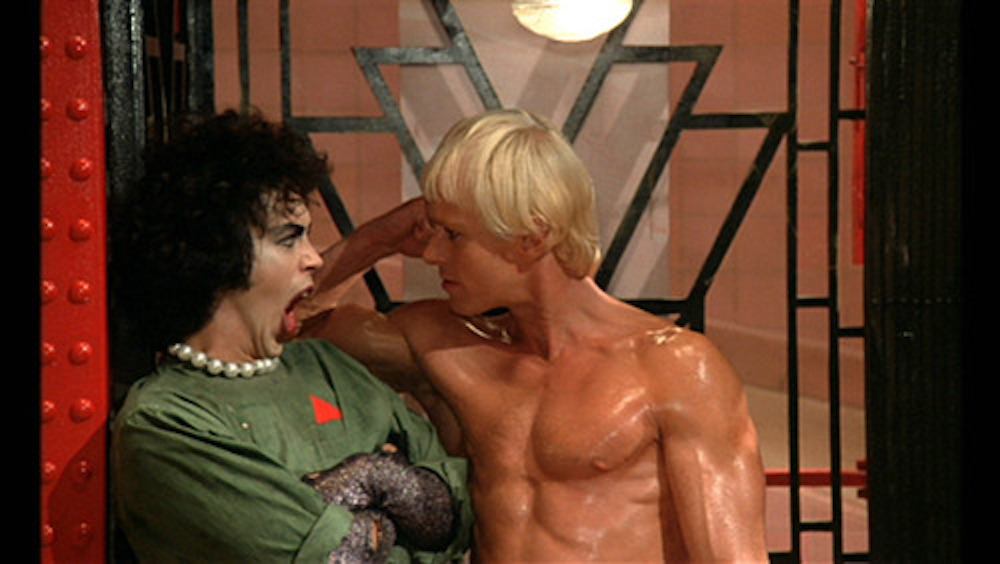 Few people realize that The Rocky Horror Picture Show, the 1975 sci-fi camp cult rock musical, actually had four follow-up films: three were direct sequels that never made it to film, and only one became a 1981 film musical following Brad and Janet as newlyweds in their hometown. Let’s take a closer look at all four.

In Rocky Horror Shows His Heels, Janet is pregnant with Dr. Frank-N-Furter’s child, Brad and Dr. Scott confess their newfound homosexuality and Rocky is “miraculously reborn” with a desire to resurrect his creator, Dr. Frank-N-Furter.

When Dr. Frank-N-Furter comes back to life—resurrected by Brad and Dr. Scott’s blood—both blood donors lust after him, but Frank-N-Furter is more concerned with raising Janet’s newborn son. Frank-N-Furter proclaims his fatherhood, much to Janet’s displeasure, and tells the celebrating locals that he’ll host a legendary birthday party and costume contest at his mansion.

On his way there, Frank-N-Furter sprinkles magic dust upon the townspeople to turn them into party-going transexuals, similar to the “Transylvanian” partygoers in the first film. But soon Furter falls ill and tells Brad and Dr. Scott that he needs blood from 11 virgin men in order to survive. Brad convinces some young men to donate, not realizing that one of them isn’t actually a virgin.

Meanwhile, two mysterious people dressed as ghosts steal Janet’s baby from the hospital and tell her that it has died. Janet follows them to the mansion. There, she declares her love of Frank-N-Furter, much to his disgust.

Then, Frank-N-Furter begins to decompose because of the non-virgin blood. Declining in power, his spell wears off of the partygoers just as the “ghosts” reveal themselves as Riff Raff and Magenta, Frank-N-Furter’s murderous butler and maid from the original film.

As the now-unenchanted townspeople turn against Brad, Dr. Scott and Rocky for associating with the unruly doctor, Riff-Raff kills Frank-N-Furter and then kidnaps Janet’s baby alongside Magenta. The closing shot makes it clear that the baby will grow up in Frank-N-Furter’s debaucherous rock-and-roll footsteps.

In an apparent attempt to create a story markedly different from his original film, O’Brien wrote this convoluted tale of marital discord, small-town conservatism and sibling jealousy which basically disregards everything that happened in the original film.

After Janet lands a successful job as the manager of their hometown TV station in Denton, USA, newlywed Brad becomes a drinking, smoking, despondent couch potato.

Everett Scott, who now also works as a TV manager for some reason, tells Janet that Brad is an “emotional cripple” who should receive intensive treatment in a mental asylum. Janet reluctantly consents and has him committed against his will. Two highly questionable sibling “doctors” named Cosmo and Nation McKinley oversee his care.

Little does Janet realize that the asylum is part of a larger plan by the TV station’s owner, fast-food magnate Farley Flavors. Flavors wants to market a national brand of sanitariums to improve the nation’s mental hygiene and he’d like Janet to serve as its glamorous public face.

But Flavors has a deeper motive: He’s in cahoots with Everett Scott, Nation and Cosmo. Together they’ve deliberately detained Brad and convinced Janet that Brad hates her so that Flavors can seduce Janet, turn her into a media sensation and claim her as his own.

Luckily, two sleuths at the TV station uncover Flavors’s plot (which we’ll keep secret as it also appears in the plot of Shock Treatment). But they help Brad escape and confront Farley at the grand opening of his newly unveiled town recreation center.

It turns out that Flavors wanted to start a U.S. chain of “Dentonvale Sanatoriums” complete with a line of “therapy cassettes, homemade straitjackets, and leaflets under the name ‘The Sanity Menu.’”

In the end, Brad and Janet are re-united and Flavors tells the grand opening attendees that the newlywed couple are truly insane and shouldn’t be trusted. Unsure whether to stay or flee, the sleuths tell them that no matter what they choose, they should start thinking for themselves rather than always believing con-men.

The Brad and Janet Show would’ve gotten made if it weren’t for a 1980 strike by the Screen Actors Guild. By the time the strike ended, the production team only had a short amount of time to shoot the entire thing. Which is how we got…

Forced to shoot in a quick span of time, the producers decided to film The Brad and Janet Show in a soundstage, making its outdoor scenes and complicated indoor settings nearly impossible.

As such, O’Brien  re-worked the script into the confusing plot of Shock Treatment. In the film, the town of Denton is located entirely in a TV studio, something that is never really explained.

The film’s plot largely follows the plot of The Brad and Janet Show, but its TV studio setting changes things somewhat as parts of the movie play out as TV shows with a live audience and other parts occur behind-the-scenes between the aspiring actors and TV station employees.

In Shock Treatment, Brad and Janet compete in a Newlywed Game-style TV show called Marriage Maze. When Brad “loses,” he’s carted off to an in-studio mental asylum whose goings-on are taped and broadcasted as a dramatic reality series called Dentonvale.

We later discover that the TV station owner and fast food magnate Farley Flavors has the entire town in his grasp and has imprisoned Brad so he can turn Janet into a singing TV star. Although Janet is initially concerned for Brad, she eventually succumbs to the glamor and fame Flavors offers.

Though the film ends similarly to The Brad and Janet Show, we won’t reveal its plot twist. Suffice it to say, Shock Treatment itself is hard to understand, and though it was marketed as “Not a sequel, but an equal,” its songs and plot are nowhere as good as the original’s.

Despite that, it still has three pretty good tunes—“Denton, USA,” “Little Black Dress,” and “Breaking Out” (a song that doubles as a coming out rock anthem). It also predicted the dehumanizing popularity of reality TV.

While the first film viewed rock-and—roll, cross-dressing and pansexuality as threats to Brad and Janet’s small-town innocence, its follow-up sees  conservative values as even more widespread, corrupt and soul-deadening.

In 1988, O’Brien wrote a proper Rocky Horror sequel and he created Revenge of the Old Queen. It mostly dispenses with Brad and Janet entirely.

Set partly on the planet Transexual in the galaxy of Transylvania, Riff Raff serves as a general in the army of The Old Queen, the planet’s dying ruler and mother to Dr. Frank-N-Furter. Unaware of her son’s death, the Queen tells Riff Raff to return to Earth and bring back her son so that he may succeed her as the planet’s ruler.

Riff Raff, who jealously slayed his own sister Magenta for having an affair with the queen’s portly first cousin Lord de Lordy, returns to Earth to find himself in an abandoned safe house for Transylvanians left on Earth after the first film. There, he dresses as a woman and drugs and seduces Brad’s younger brother, Steve. Steve works for the U.S. Bureau of Investigation Into UFOs and has come to the safe house to look into the occurrences of the first film.

Using Transylvanian technology cleverly hidden in showers around the world, Riff Riff teleports Steve to Alaska and then transports himself back in time to try and stop himself from killing Dr. Frank-N-Furter.

Concurrently, a female Bureau investigator named Judith accidentally transports herself to the planet Transexual. Upon arrival, she and  Lord de Lordy fall in love. Finding them in bed together, the Queen accuses Judith and Lordy of treason, but the Queen then learns of Riff Raff’s treachery and everyone hunts him down for a final intergalactic shoot out on the front steps of Frank-N-Furter’s mansion from the original film.

We later learn that Janet became addicted to booze and cigarettes and drunkenly birthed a son with Frank-N-Furter, a space case gender-bending musician named Sonny. We also learn that Brad became a bottomless dancer in Las Vegas and died after falling from a trapeze wearing nothing but a diamond choker and six-inch heels. (What a way to go.)

Alleged copies of the film’s script are available online. O’Brien reportedly tried to incorporate parts of it into a stage play entitled Rocky Horror: The Second Coming with the hopes of adapting it into a film if it proved popular. But alas, the play was never produced.

Despite the original’s problematic tropes, we still hope for a true Rocky Horror sequel one day. Until then, “Let’s Do the Time Warp Again” by enjoying the original in all its queer, campy glory.