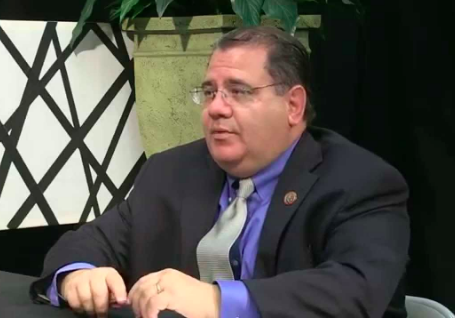 Republican state Rep. Tim Schaffer has introduced a bill that would outlaw performances by “a child under eighteen years of age or a mentally or physically handicapped child under twenty-one years of age.”

If passed, violators of the statute would face up to six months in prison and a $1000 fine.

Schaffer introduced the bill after learning about the performance by a 9-year-old drag queen. Jacob Measley set off a firestorm of controversy after he performed a drag routine as “Miss Mae Hem” at a Toledo Pride event.

Schaffer slammed Measely’s parents as “a very bad example of parenting,” and likened it to sex slavery.

“Given our heightened focus on human trafficking and the role money plays in trafficking children, I knew I had to take action to make sure this activity does not occur again,” Schaffer said of the bill. “We can do better to protect innocent children and we must do better.”

For all Schaffer’s bluster, however, Measley’s parents have defended their decision to let him perform.

“Jacob is just a guy who likes to dress up and dance and feel pretty,” said Jeri Measley, Jacob’s mother. “It’s kind of like Halloween every time he has the opportunity to do it.”

She further explained that her son is a huge fan of RuPaul’s Drag Race, and that she never allows him to perform songs with sexual lyrics or overtones.

Thus far, Schaffer’s bill has eight co-sponsors, all of whom have very anti-LGBTQ records. Critics worry that if passed, the law could be used too broadly to attack any parent or venue that allows a queer child to embrace his identity.

on the menu
10 comments

rumor has it
13 comments