Queerty encourages you to stay safe during the Covid-19 pandemic. If you choose to travel, we recommend that you follow all CDC Travel Guidelines and adhere closely to all local regulations regarding face coverings, social distancing, and other safety measures.

If you love “The Greatest Snow on Earth®,” a thriving LGBTQ scene, and the pandemic safety of the great outdoors then consider the wonders of Salt Lake City and its famed and fun-packed ski resorts.

The city is enjoying a well-deserved moment right now thanks in part to Bravo’s The Real Housewives of Salt Lake City.

The show’s six glamorous matriarchs – Meredith, Whitney, Jen, Heather, Mary & Lisa – show why the city has become an LGBTQ destination, highlighting its world-class ski resorts, burgeoning food and drink hot spots, and thriving queer social scene (a lot of friendly-places and rainbow flags are in a district known as the Marmalade, just northwest of Capitol Hill).

And let’s not forget Meredith’s fantastically droll, 21-year-old gay son: aspiring fashion designer Brooks Marks, pictured below, who is the first openly gay son of a Real Housewife and has people talking about his love of nightlife and completely out-there persona, showing just how far the city has come not just toward acceptance but the celebration of gay life.

If you’re a Salt Lake City virgin or considering a return visit, then let one of the most fabulous Real Housewives – and Equality Utah supporter – be your guide.

Queerty caught up with the cast member Lisa Barlow, founder of Vida Tequila, to chat about the show and for some personal recommendations on where to hang out in Salt Lake City.

“My grandfather was gay, and for me, it’s really important that we are supportive of our LGBTQ communities,” Barlow tells us. “Seriously, we have so many great gay bars. People come from LA just to come out to our gay bars.” 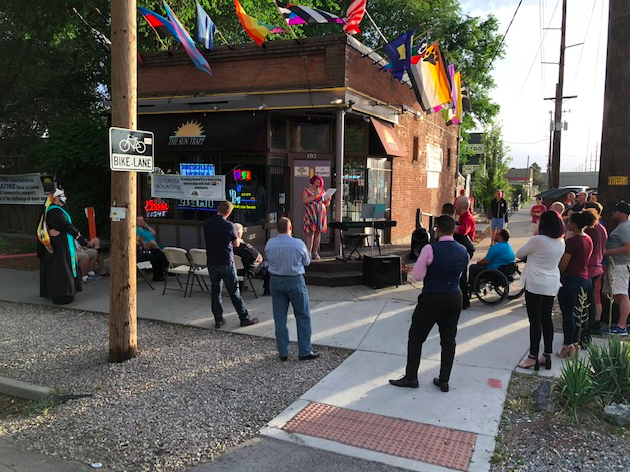 In a post-pandemic world, Lisa recommends two of Salt Lake City’s best venues, Sun Trapp, pictured above, and Club Try-Angles. The lively Sun Trapp can be found in the Rio Grande neighborhood and boasts outdoor, patio seating, and DJs at weekends.

Try-Angles, another venue in the heart of the city, is a cozy bar with regular attractions like Drag Bingo.

“Those are the two hottest gay bars. Why? Because all the hot guys and girls go there,” Lisa laughs.

The venues were a favorite hangout for several members of the Real Housewives production crew, who headed there whenever they finished work. “If production people were like, OK, we’re gone, we’d always know exactly where they’d gone!”

Some may underestimate exactly what an LGBTQ capital Salt Lake City has become.

“We are the most gay-friendly city,” Lisa says emphatically. “Per capita, we have the most same-sex couples raising children in the United States.”

On RHOSLC, Lisa readily admits her designer kitchen is more for decoration and she hardly ever cooks for her husband and two kids: “We love to go out. We’re not homebodies!”

Despite dubbing herself the “fast food queen,” Lisa, who hails originally from New York City, has a taste for the finer things in life. It’s one of the many reasons she loves her adopted home city, where she relocated 20 years ago.

“If you want to go and just hideaway in the mountains and pretend like you’re in the Alps, I love Log Haven,” she explains to Queerty. “You feel cozy and you feel warm, especially at this time of year in Utah.”

This downtown Salt Lake City favorite was the scene for a luncheon party that megachurch heiress Mary Cosby threw in episode four. The restaurant, in the heart of the city, provided the perfect setting for some passive-aggressive scene-setting tension between Lisa and fellow Housewife Jen Shah. And, filmed pre-pandemic, the poor owner Valter Nassi just wanted to serve up his award-winning pasta!

Valter’s Osteria serves Tuscan-inspired dishes. It has become one of downtown Salt Lake City’s most acclaimed restaurants since opening in 2013. The homemade pasta has become legendary, making special the rigatoni in Valter’s special porcini and meat sauce and the ravioli with butternut squash, butter, and sage. 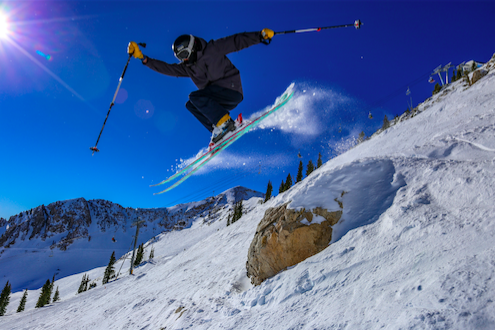 In episode two of Real Housewives of Salt Lake City, cast member Heather Gay organizes a memorable skiing trip to the nearby, incredible slopes at Snowbird ski resort, prompting a rush of last-minute shopping for winter wear by the wives! One of the most popular resorts in the mountains overlooking Salt Lake City, Snowbird was rated one of the best ski resorts in North America by USA Today, which highlighted the large volume and quality of snow the slopes offer. Advanced skiers will love the off-piste terrain and steep chutes of this must-see resort, but there’s also plenty of beginners and intermediates.

Snowbird also boasts a multitude of dining options, including the fine-dining American grill menu at SeventyOne (another Real Housewives hotspot and the scene of some frostiness between Whitney and Lisa). Also be sure to check out the Cliff Spa at Snowbird, with its fabulous heated outdoor pool overlooking the slopes. 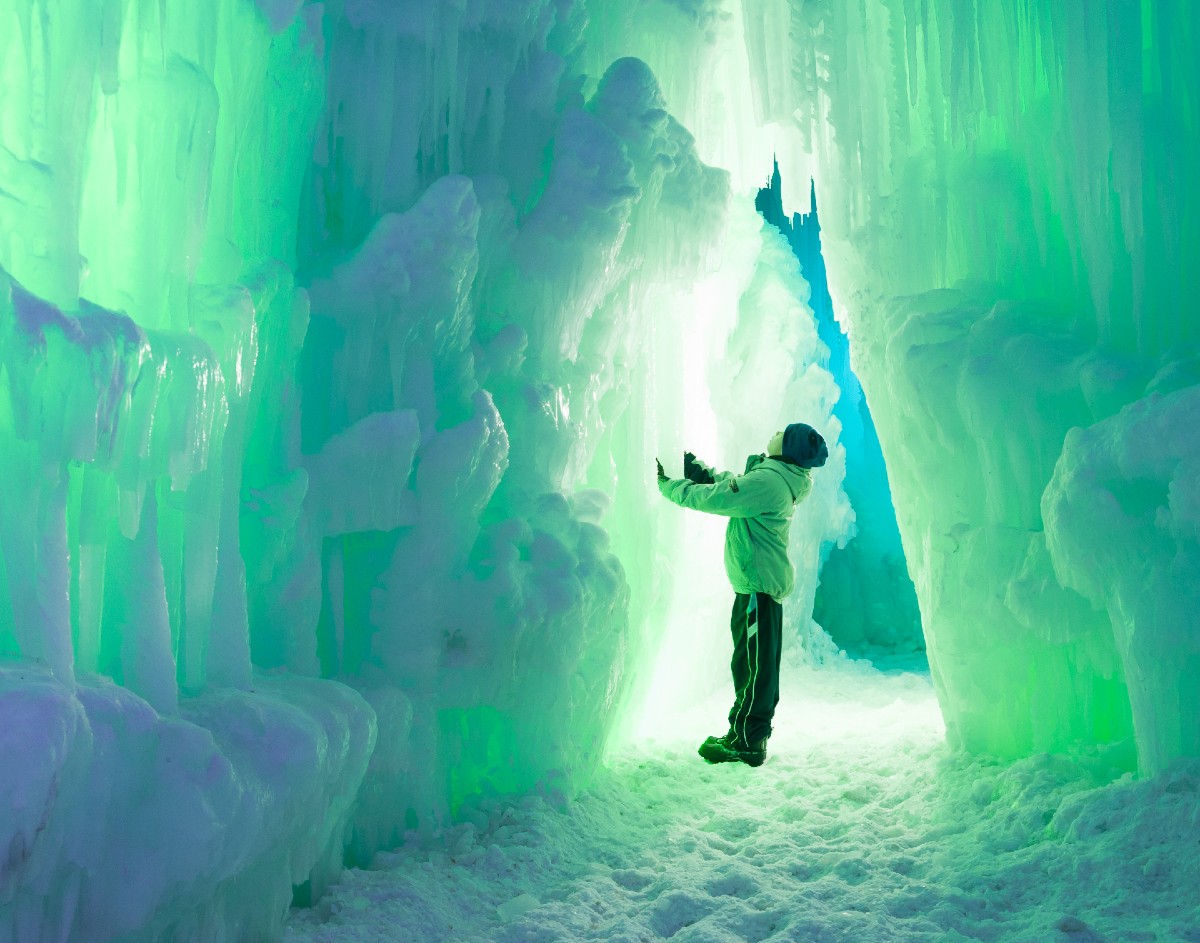 “They build these insane ice castles that are all lit up at night,” says Lisa. “We just took our kids. They are so fun for a date night. Go grab a hot cocoa and walk through these beautifully lit sculptures.”

The stunning and wondrous creations are constructed from thousands of icicles, hand-placed by professional ice artists, and illuminated by LED. This year’s castles – a 45-minute drive from central Salt Lake City – are open now and will remain open until late February or early March, dependent on weather conditions.

Salt Lake City loves to party, and there are a couple of big, annual events to keep an eye out for when restrictions begin to lift this spring. Lisa is a big supporter of advocacy group Equality Utah, which throws its annual Allies Gala each fall.

“We love Lisa!” he adds about one of the group’s biggest supporters.

If you’re a fan of glamorous drag, another annual highlight is the Miss Great Beehive State Drag Pageant. Now in its fourth year, it normally takes place in January but has been pushed back to September for 2021.

You can also check out the Viva La Diva female impersonators show at Metro Music Hall (“the best drag show ever, it’s amazing,” says Lisa) and the occasional ‘Qurom of the Queens‘ drag brunch at Tavernacle Social Club in the Downtown district. 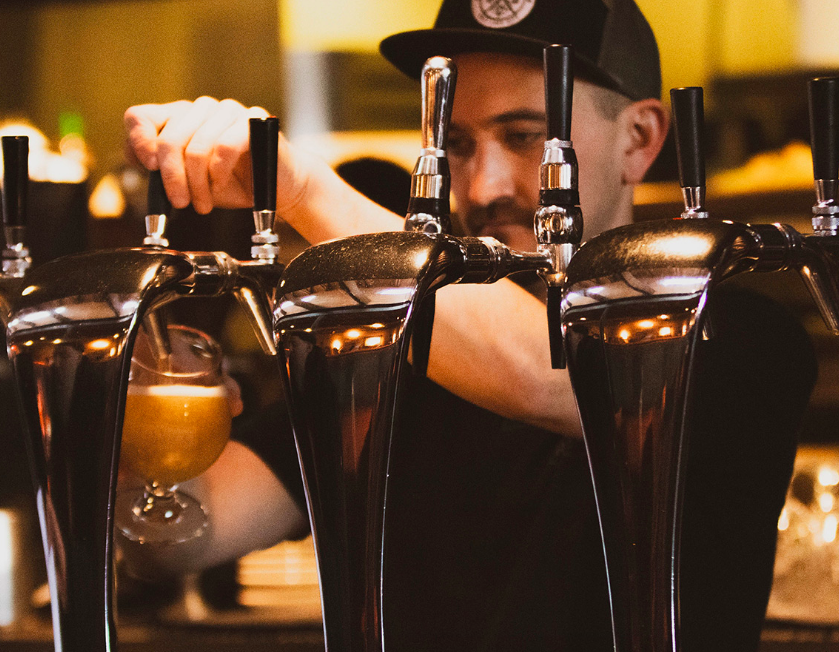 Lisa also recommends checking out the burgeoning micro-brewery scene, confounding misconceptions about Utah being a ‘dry’ state when it comes to alcohol. She says many others continue to offer tasting sessions.

First, there’s the Red Rock Brewing Co. which sells from a dedicated beer store within its Capitol Hill brewery and via all branches of Harmon’s and Whole Foods stores throughout Utah. Curbside pickup is encouraged during the pandemic.

Another of Lisa’s recommended brands is Salt Flats Brewing, which sells a large array of craft beers and spirits, including a chocolate milk stout and a golden sour ale aged in wine barrels. Salt Flats has an on-site taproom and store at its brewery in the south-west of the city at 2020 Industrial Circle. 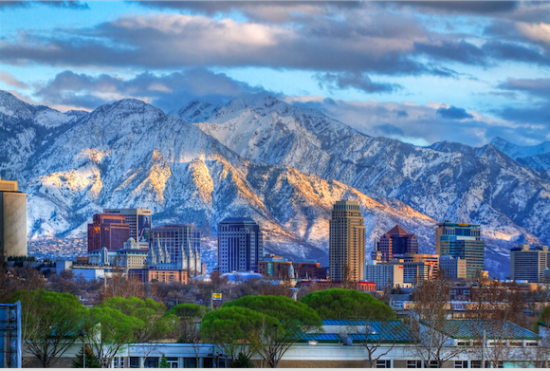 Whether you’re looking to stay in the heart of the city or closer to the mountain resorts, Visit Salt Lake’s “Salt Lake Bound = FREEdom Found” is something to consider when booking your trip. Book a 2+ night stay and enjoy free perks such as gas cards, Connect Passes, and other travel deals.