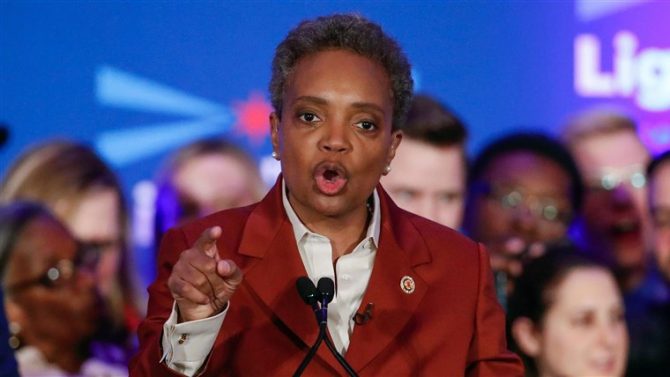 Lori Lightfoot did not mince words during a press conference this afternoon when asked by reporters how she feels about Donald Trump.

Speaking from the podium, the first-ever Black lesbian mayor of Chicago accused Trump of trying to “foment violence” after he called for “thugs” (his word) protesting the death of George Floyd to be shot in the streets.

“We see the game he’s playing because it’s so transparent,” Lightfoot seethed, “and he’s not very good at it.”

“He wants to show failures on the part of Democratic local leaders to throw red meat to his base. His goal is to polarize, to destabilize local government and inflame racist urges. And we can absolutely not let him prevail.”

Then came the kicker: “I will code what I really want to say to Donald Trump. It’s two words: It begins with F and ends with YOU.”

Lightfoot then demanded an apology from Trump for his racist behavior and poor leadership.

And when it was suggested by another reporter that maybe she follow the wise words of forever first lady Michelle Obama when she said “When they go low, we go high,” Lightfoot responded: “I’m not Michelle Obama.”

Here's the video of Mayor Lightfoot responding to Trump.

Exact quote:
"I will code what I really want to say to Donald Trump. It's two words: It begins with F and it ends with YOU." https://t.co/dnj8KRMWT4 pic.twitter.com/quYv9aobgD