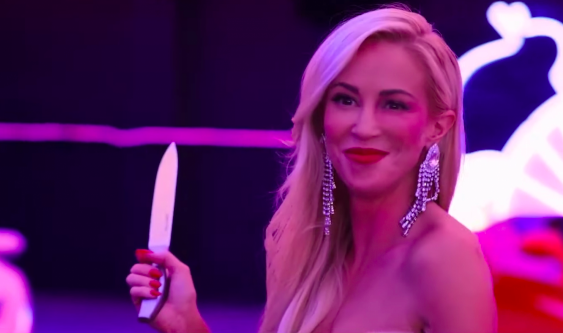 Me You Madness is Linton’s directorial and writing debut. She also stars in the vanity project, which tells the story of a greedy sociopathic bisexual woman who also happens to be a serial killer.

Because apparently there aren’t already enough negative depictions of bisexuals out there.

The film has been panned by critics, who have called it “dull,” “vapid,” “ego-drenched,” and “an insult to vanity projects.” One critic went so far as to compare the whole thing to a car commercial.

In an interview with Business Insider, Linton says she thinks people are treating the film unfairly because of her connection to Donald Trump.

“I think they can’t get past the Trump effect,” she said. “And even for those who did enjoy the film they simply could not possibly say that they enjoyed it. I don’t really worry about the critics.”

After saying she doesn’t “really worry about the critics,” Linton then went on to talk ad nauseam about her critics.

“And who knows, art is subjective. Maybe they did dislike the film. I don’t know why,” she said. “And you know, I found a lot of compliments hidden in some of those reviews.”

“I do think the ‘Trump effect’ does make people less willing to have open arms for the movie.”

Later in the interview, Linton called the criticism lodged against her “ironic” since she’s “the biggest liberal you’ll ever meet.”

“What’s ironic is I’m the biggest liberal you’ll ever meet. I do animal rights. I donate to immigrant family organizations. I do the Pride Run every year. I’m a very, very liberal person.”

In 2016, Linton’s white savior memoir “In Congo’s Shadow: One Girl’s Perilous Journey to the Heart of Africa,” which chronicled the time the “skinny white muzungu with long angel hair” spent in “darkest Africa,” was yanked from circulation for being too racist for publication.

A year later, the actress made headlines for mocking the poor after a mother in Portland called her out on Twitter for bragging about traveling on the taxpayer’s dime and flashing her extreme wealth.

“I’m pretty sure we paid more taxes toward our day ‘trip’ than you did,” she told the woman. “Pretty sure the amount we sacrifice per year is a lot more than you’d be willing to sacrifice if the choice was yours.”

But, sure, she’s “the biggest liberal you’ll ever meet.”

Speaking to Business Insider today, Linton says she is “a multi-faceted person” and doesn’t want her past to define her.

“I would just like to be seen as who I actually am rather than some media persona that is really so far from the truth,” she laments.

She adds that being lumped in with the Trump klan has “been a frustration to me.”

“I am my own person and I should be defined by the things that I contribute toward. I mean, I’m married to somebody who was in that administration. We are individuals. I have my opinions. He has his opinions as do many married couples.”