We got lucky that after weeks of trying we got Marcel Gisler on the phone. We are not desperate, really!, except for the fact that his film Mario just hit streaming services October 30. The co-financed Swiss-German production already scored positive notices on the festival circuit all over the world this year, and it is on every Queerty list of the year’s best queer flicks.

Mario follows its eponymous character, a life-long soccer player on the brink of a high paying career in pro sports as he prepares to enter the big league. When his coach pairs him in a roommate situation with the handsome new player Leon, Mario must come to terms with his attraction to his new roommate and decide how it will affect the future of his career and the financial rewards that will come with it. The film fits with Gisler’s impressive resume; the out-gay director (almost) always includes queer themes in his work.

We took a few minutes to chat with Marcel about the film, the politics of sexuality in European sports, and his hopes for the future.

What was the inception of Mario?

I think the question is why didn’t other people have the idea to do it. My co-writer [Thomas Hess] had the idea to do a film like this. He talked to me eight years ago. He’s a big [soccer] fan, I am not so much.

Then I thought the idea must be too obvious; I thought there must be a film of this kind already. We did a little research and found out there was no gay love story in a soccer film. You call it soccer?

Yes, we call it soccer.

We call it football here. There had not been an authentic gay love story in this milieu. I thought because I found it irritating that in football there is no player who is openly gay. There are gay players, I know that, but I found that very irritating. Why, in other areas of society is it possible to come out? Why not in football? So I did my research, and I thought maybe it would be difficult to be the first to do a thing like that. But also, I thought that there is a socio-political impact which I found interesting. So we began to write the script and we got the film financed in Switzerland.

So when it came time to cast the film, how did you find Max Hubacher?

Max, I knew already as an actor because he’d played in two Swiss films already, maybe as a teenager. I saw him, and I thought he was a very good actor. I met him and when I learned that he played football for several years, I thought he’s the guy, I absolutely want to have him. He’s just how I imagined Mario. He reminded me of Heath Ledger in Brokeback Mountain.

Just the blond type of guy you’d never think would be gay. I thought that was important for the actor [playing Mario] because he’s socialized in an environment where young boys show more macho behavior. When you spend your whole life only playing football, and you imagine yourself being gay, you adapt your behavior. So Max was OK, he found the script interesting and wanted to do the role. Then we had to find his partner [Leon, played by Aaron Altaras]. And we went to Germany to find the actor because in the script he’s a German guy who comes to Switzerland. It’s quite a little bit different language also, which, you might not be aware, but German people do not understand our dialect in Switzerland.

That is interesting. I can hear the difference in their accents.

Yeah. Swiss-German is quite different from High-German. So we did a large casting call in Germany, and of course, the condition was that the guy could also play football. Max came all the way to be a scene partner for the casting. I liked the chemistry between the two, and I found more interesting than the more athletic and dark-haired Aaron was the complete opposite of Max, but also mentally completely different. Mario is the type…he has only his sports focus and is not aware of his feelings and other needs. Aaron/Leon is more introverted but more sensible and aware. So I thought the combination was interesting. 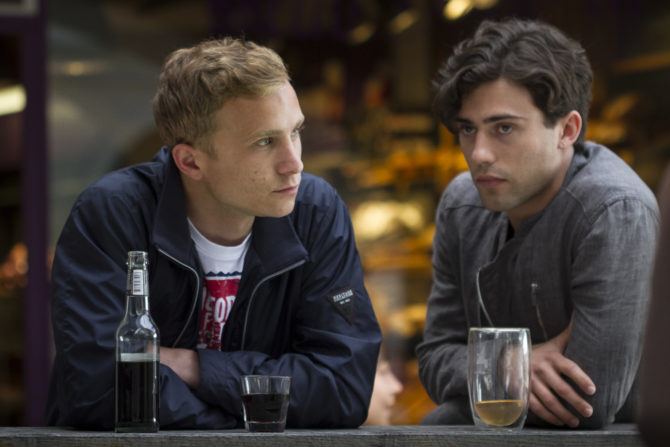 What you say about attitudes toward gay people in Europe is quite interesting. In the US, we tend to think of Europe, and Germany in particular, as being far more welcoming. The film argues that’s not the case. In your experience, what are attitudes like in Switzerland?

You have to know the difference between cities and the more countryside villages. There, it’s a little bit difficult. Now, we are in a time where society is a little bit more open, a little bit more liberal. That’s the case in Switzerland also. But there are some areas in society where it’s like a parallel society, you know? Even in the US for example, Hollywood—famous actors hardly come out because it’s a big business and that could decrease their market value. In football, it’s the same thing. Football is the most popular sport globally seen, and it’s a product, and you have to sell it in societies where politics are hostile to homosexuals. And you see the next Royal Championship will be in Qatar where homosexuality is punished by law. They are persecuted. And also, a player is a product. So a player wants to be sold in a country where homosexuals are not accepted. So he will think very long before he comes out. I think the main issue is economic. It’s difficult to be openly gay in these sports.

In Germany, we can marry. Here in Switzerland, it is not equal. You can have a partnership, but no right to adopt children.

The most intriguing scene in the film is the one in which management talks about how they need to remove Mario from the league, but can’t let homosexuality be the official reason. That strikes me as really scary, in that homophobia is becoming veiled.

I think the fans are not the problem. Maybe there is a minority of football fans, very right-wing people, they are not for diversity. They are against foreigners, they are against anything that’s different. We know that. That is part of the fanbase, but I think it’s a minority. When you compare to racism, which they’ve succeeded now to [remove] it from states successfully because they just closed the games. When there was too many fascistic songs or hate in states, they close the states and they have to play without audiences. They could do the same thing with homophobia, but they’re not interested. I don’t know why. Homophobia in states is tolerated—not everywhere, it depends on the culture of the club [the term for a league in Europe]. For example, in Hamburg where we shot the last scenes, they’re very liberal. Very open. And they have always positioned themselves very political and manifested themselves for diversity and against homophobia. It depends really on the culture of the club. 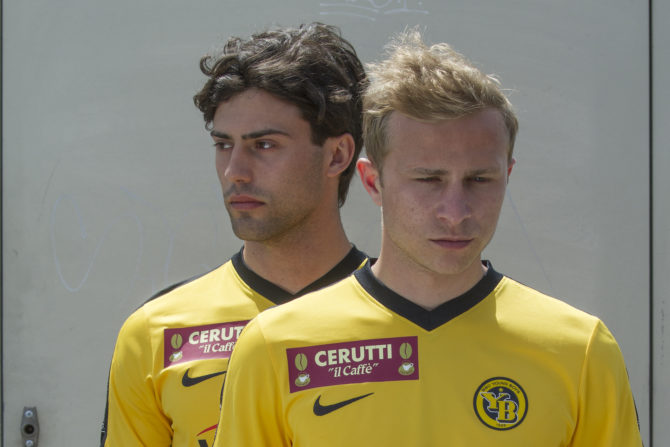 The point is, nowadays no club would ever say “we will not accept a gay player” or “we would not support a player who wants to come out.” They pretend to be liberal, but it’s only on the outside because these days nobody can be openly homophobic. So they would say “yeah, we are very open to that.” But when you look inside the clubs, there is no engagement or conscious of the topic. They’re just not interested.

Many people who saw the film—heterosexual people—they are very moved and say to me “we weren’t aware of this problem. We thought there was no problem being gay, that people could come out.” They just didn’t know because nobody points to this problem. I hope it is a little step to just maintain the discussion.

My films always have gay issues, but the next will not.

It’s a TV movie in Switzerland. I said yes because I thought it was an interesting topic. It’s about the changes in psychiatric treatment in clinics in the 70s in Switzerland. Before they had very heavy medication for mental patients. They fight to open the clinics and have treatment outside the groups.

The older I get, the more I chose social and political subjects. And that’s why I’m doing the film.