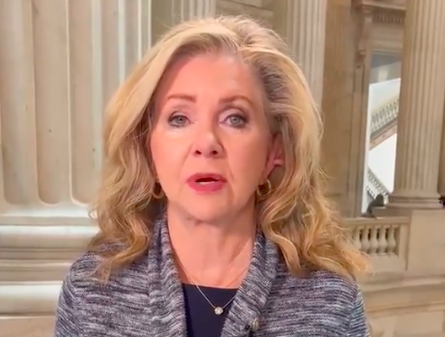 Antigay Sen. Marsha Blackburn has taken a break from squabbling with Taylor Swift to pen an insane new op-ed for Fox News.

The article, which was co-written with fellow antigay Sen. Tom Cotton, is about how “free speech”, which everyone knows is GOP code for hate speech, is “under fire on America’s college campuses.”

“Whereas schools once prided themselves on fostering free and open debate, today they create ‘safe spaces’ to shield students from difference, diversity of opinion, and dissent,” the two senators write.

It goes on to talk about how a recent survey found 60% of college students felt they couldn’t express their true opinions (again, hate speech) at school.

It also claims that “opposition” to “free speech” is “infecting the student body” and that vicious “revolutionaries” and mobs of “left-wing demonstrators” are engaging in everything from “intimidation to character assassination to outright violence” to silence their peers and shut down debate.

The op-ed concludes with Blackburn and Cotton announcing plans to create a new caucus in the Senate focused on protecting “free speech on college campuses” and promoting legislation that ensures “diverse viewpoints are respected and debated.”

Because nothing says “small government” like a group of Republican senators policing what private universities are allowed to talk about in classes that adult students have elected to take.

Now, let’s see what Twitter is saying about the whole thing…

free speech, journalists & people who oppose trump were repeatedly attacked under trumps presidency eroding the foundation of open debate. blackburn said nothing. nobody should believe blackburn has the slightest concern about it now.

Hate speech is under fire on America’s college campuses. #FixedItForYou

Don’t think it’s “free” speech they are fighting for so much as “free from truth” speech.

Free speech is okay so long as it’s yours?

Hate speech is NOT free speech. Keep your Bronze Age Mythology out of our Secular Constitution.

Marsha tried to have a guy fired because he said “unkind” things about her. I guess his free speech didn’t count?

Free speech?! By limiting expression of those you disagree with?

The thing Marsha doesn’t understand is that free speech works both ways. When she gets shouted down, that’s the system working. She’s and other knuckleheads are not entitled to be listened to.

Show me one person jailed for something said on a college campus.

If you can’t find one, there’s literally no free speech under attack.