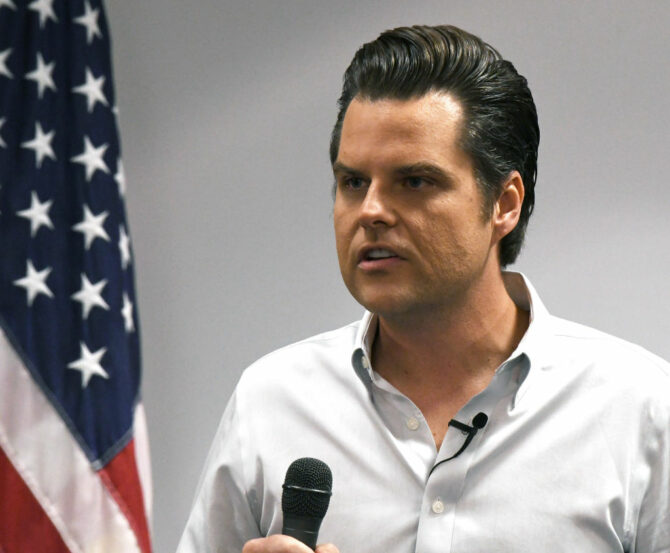 Matt Gaetz formally announced his plan to run for re-election in 2022 and, like just about everything else he does, he somehow managed to screw it up.

Related: Matt Gaetz gets fact checked about 2020 election by reporter on live TV and OMG how embarrassing

The anti-LGBTQ congressman, who is currently under federal investigation, confirmed he will fight to keep his seat in the U.S. House on Saturday while speaking to about 150 supporters at the grand opening of his new campaign office in Fort Walton Beach, Florida.

He followed that up with an announcement on Twitter, writing: “It’s chose [sic] your fighter time. I’m you’re [sic] Florida Man!”

Unfortunately for Gaetz, whatever excitement his announcement might have received was completely overshadowed by people pointing out the glaring spelling and grammatical errors in his tweet.

Nine words. NINE. And you still spelled two of them wrong.

Florida can do better.

“My subliteracy will own the libs,” declares Matty Fivehead.

Two sentences, that’s all you needed, and you still fucked it up.

How did you pass a bar exam?

Matt, may I suggest a little reading? pic.twitter.com/xfg5ccQ5cf

I am sure us Floridians want a fighter who knows how to spell, I know I do.

Your spelling errors indicate that you may have been higher than your Fivehead when you crafted this tweet, Matty. 🧐

In other Gaetz news, according to his latest campaign finance disclosure forms, he raised just $534,000 in the final quarter of 2021, which is a huge drop from the $1.8 million he raised in the first three months of the year.

Overall, Gaetz’s fundraising has been gradually slowing down, dropping to $1.4 million in the second quarter and then to $527,000 in the third quarter.

A dip in fundraising between election years isn’t uncommon, and some of Gaetz’s GOP colleagues, like Rep. Marjorie Taylor Greene, saw a similar slowdown in fundraising from their earlier hauls. A joint fundraising operation between Gaetz and Greene also reported bringing in only $19,000 in the final quarter of 2021, compared to the nearly $360,000 it raised in the second quarter.

Meanwhile, as the sex trafficking investigation unfolded over the past year, disclosure records show that the Gaetz campaign’s legal bills rose significantly.