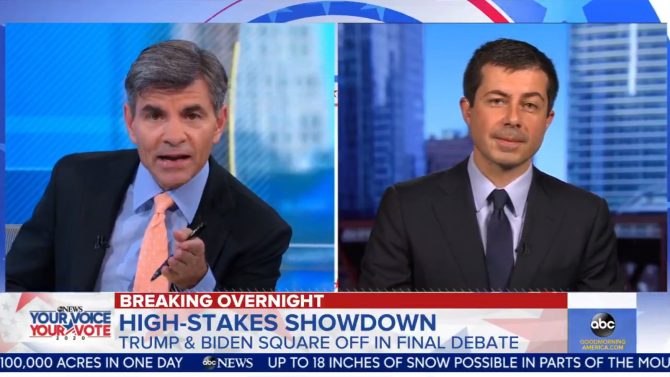 Pete Buttigieg, the former Mayor of South Bend, Indiana and current advisor to the Biden Presidential Campaign, took to the morning news in the aftermath of last night’s debate between Biden and President Donald Trump. The ever-affable Buttigieg visited Good Morning America to chat about the performance of both candidates. When host George Stephanopoulos pressed Buttigieg on Biden’s stance regarding phasing out fossil fuels, the former mayor gave a pointed answer.

“Look, we have a very simple choice,” he said. “A president who’s going to do something about climate change before it ruins our futures—and that’s Joe Biden—and a president who says it’s a hoax and won’t do anything about it. Joe Biden acknowledged the reality that America, for the past 50 years, has been evolving in our energy and will continue to need to do so and eventually move to a carbon-neutral society. The President doubled down on his ‘crazy uncle’ approach, saying that windmills kill all the birds–whatever that means. The choice couldn’t be clearer. With climate, as with the pandemic, a President that doesn’t believe in science puts American lives at risk.”

More importantly, Buttigieg reminded Biden supporters, Democrats, and anyone concerned about the ongoing pandemic, America’s status in the world, the economy, or much of anything else, to vote by November 3.

"With climate as with the pandemic, a president who doesn't believe in science puts American lives at risk." @PeteButtigieg breaks down Joe Biden’s performance in the final debate against Pres. Trump. https://t.co/U90KAkAU45 pic.twitter.com/EmExiVflak

“Any Democrat, I think, remembers the experience of 2016,” Buttigieg remarked, “and is determined to make sure this time around we turn out every vote. That’s why we know that this race is going to be close, especially in these critical swing states. We’re asking everyone to make a plan to vote if you haven’t voted already.”

For more information on voting, including registration, locations and other deadlines, visit our vote center on our sister site LGBTQ Nation.