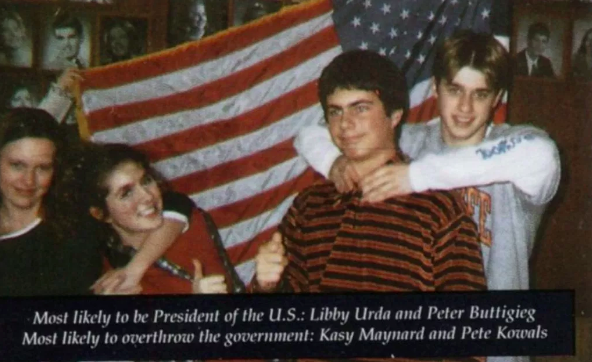 The year was 2000. Donald Trump (a.k.a. “The Donald”) appeared on MSNBC’s Charles Grodin show to predict that one day he would be elected President of the United States of America.

Meanwhile, over in South Bend, Indiana, Pete Buttigieg was a geeky senior at St. Joseph’s High School, where his classmates voted him “Most likely to be President” in their class yearbook.

“He was exactly as he is now,” she says. “You know what else? Mayor Pete was also voted most likely to become president in our yearbook.”

The Catholic school’s yearbook was unearthed at a public library in South Bend, the same weekend the mayor of the 299th largest city in America announced he was taking his first swing at the White House.

Looking through the rest of his high school yearbooks, he moved from appearing in a single photo his freshman year — sporting shaggy hair and large glasses — to showing off a dizzying array of activities in the following years, including the National Honor Society, Junior Leaders and Philosophy Club.

He was often pictured wearing a white shirt, tie and no jacket, which has also become his current political uniform. His senior year, he was also voted most likely to succeed and eventually became his class valedictorian.

Buttigieg became the youngest mayor of a city with at least 100,000 residents when he was elected mayor of South Bend at age 29 back in 2011.

If he is elected to the presidency in 2020, he would become the youngest president ever in American history.

“I recognize the audacity of doing this as a Midwestern millennial mayor,” he said during his announcement speech.

He added, “Up until recently this is not exactly what I had in mind for how I would spend my eighth year as mayor and 38th year in this world, but we live in a moment that compels us each to act.”