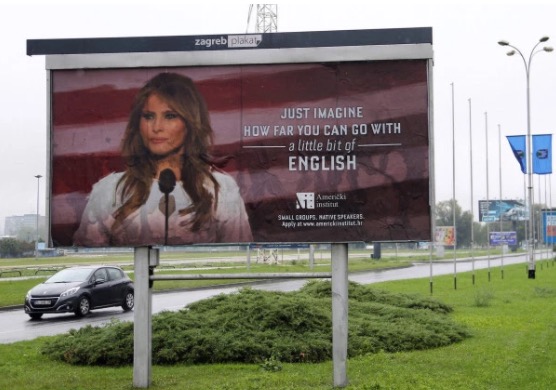 Melania Trump isn’t letting a little detail like being first lady get in the way of suing people.

Fresh off a settlement with The Daily Mail over the British rag insinuating she’d once worked as a high class escort, Mrs. Trump is now making new litigious threats over an issue that’s a bit closer to home.

Billboards with the first lady’s likeness reading “Just imagine how far you can go with a little bit of English” were taken down in Croatia’s capital city Tuesday after the offending party received a legal threat from Melania’s lawyer.

The advertisements were part of a language school’s marketing campaign in Zagreb intended to leverage the fist lady’s success in order to promote Croats learning English.

Natasa Pirc-Musar, Melania’s lawyer, demanded he school take down the signs, shown above.

“I’m satisfied with the fact that the school admitted that they violated the law and that they are ready to remove the billboards,” Pirc-Musar said. “We are still analyzing possible further legal steps.”

Melania, who is originally from neighboring Slovenia, hired Pirc-Musar’s firm to protect her image, which has reportedly popped up on everything from cakes to underwear.

“We are very sorry that the billboards were misunderstood as something intended to mock the US first lady,” school spokesman Ivis Buric told the AP. “It was meant to be something positive, to show her as a role model.”

But Melania isn’t satisfied with a mere apology — her firm is asking Croatian and Slovenian news agencies to publish the school’s admittance of wrongdoing.

Melania Trump was born Melanija Knavs. She left Slovenia for the United States in her 20s to try her hand at modeling, where she most certainly did not work as an escort.