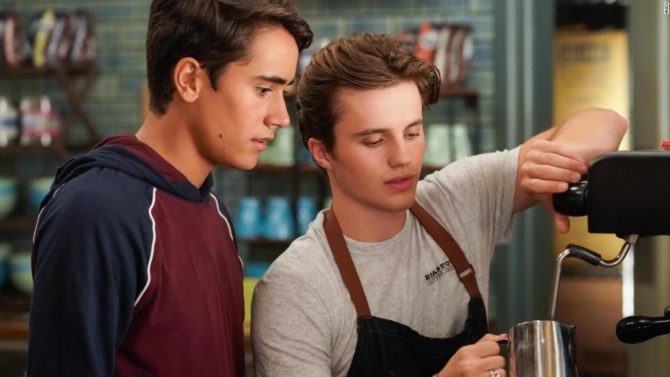 Love, Victor stars Michael Cimino has opened up about the reception to the series, and the blowback he received for playing the show’s leading gay character.

In a new interview with the UK magazine Attitude, Cimino, who identifies as straight, revealed that he endured criticism from straight and queer people alike, even receiving death threats over his work.

“I got some homophobic comments — I kind of expected that to happen. I didn’t expect it from my own family members, though”, Cimino admits. “Some of them reached out, saying, ‘You used to be so cool; now you’re so gay.’ I chalk it up to ignorance.”

He continued, “People have that programming and they often don’t have to evolve and try to push past that. There’s nothing wrong with being gay. That ignorance is often something that’s been passed on from generations prior. I always approach that [by saying], ‘These are normal people that are struggling and they shouldn’t have to struggle.’”

Related: WATCH: Things get steamy as Victor plots to lose his virginity in ‘Love, Victor’

“I’ve definitely had some criticism from the LGBT community for being in the role,” Cimino continues, referring to queer activists who insist actors should come out as LGBTQ to play a queer character. “I’ve had death threats, which is horrible. But the show is important to me. The messages of hate—I came into it knowing that would happen, regardless of how good I was.”

“There are some straight actors who play gay characters, who are all about supporting LGBT rights while they’re promoting their project, but once they’re done, a year later, it’s kind of forgotten,” he further observes. “That’s not how [to] be an ally, that’s not how you support LGBT rights. If you’re not an actual ally, then what are you doing? It’s an honor to play Victor, and a big responsibility. I went in with the pure intent to represent that correctly. I held myself to a really high standard to make sure everyone going through this story felt represented by the show.”

In the same interview, Cimino also says he was advised against playing a gay character.

“I’ve been advised that you shouldn’t play gay roles, especially your first big role,” he says. “‘Everyone will think you’re gay’ or ‘You won’t be able to book anything,’ ‘You’ll never be able to build a fan base.’ I’m not a traditional ‘masculine’ man, so that would be people trying to force me into something I’m not. Here I am playing a gay role that might not be considered masculine in an outdated idea of what masculinity is.”

Despite the drama, Love, Victor has proven very popular with audiences, and Cimino has earned praise for his work. The show currently streams on Hulu.