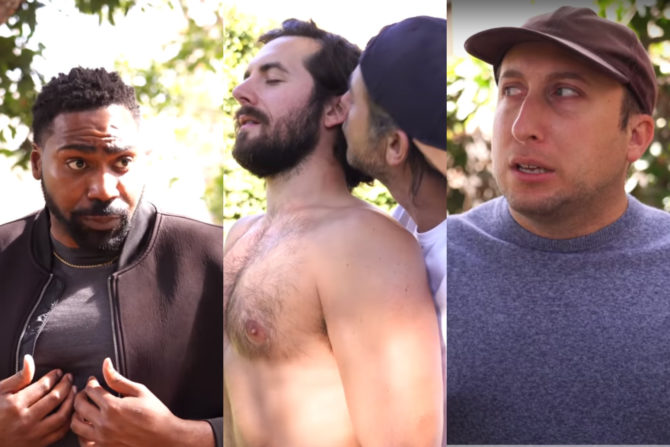 Well, it’s about time somebody said something.

Comedian Michael Henry has just released his latest video: a corrosive indictment of straight men who gaybait on social media.

The video finds Henry alongside comedian Jeremy D. Howard happening on a pair of male bodybuilder influencers. While both don’t mind the initial show, Henry and Howard differ on their views when it comes to the appropriateness of straight men engaging in homoeroticism for money.

“You should see how close they all get on his OnlyFans,” Howard says while watching said influencers work out.

“He looks amazing, but he’s a classic gaybaiter,” Henry points out.

“They’re homiesexuals,” Howard explains. “Homies that like to push the limits of their friendship together.”

“If they are married to women and identify as heterosexual, how could you think that what they’re doing is anything but a grift or a scam?” Henry screeches.

He does have a point.

The debate continues, though Henry points out that “If you want to try and make a trend or a brand or a business out of coping homos into the mystery of ‘am I gay? or am I not. Who knows?’ To me, I think that is kind of tacky.”

Ultimately Henry & Howard decide to go for tacos. That’s probably a better use of funds than donating to a straight, gaybaiting OnlyFans star. Just sayin’.

Subscribe to Queerty for a daily dose of #entertainment #gaybaiting #jeremyd.howard stories and more