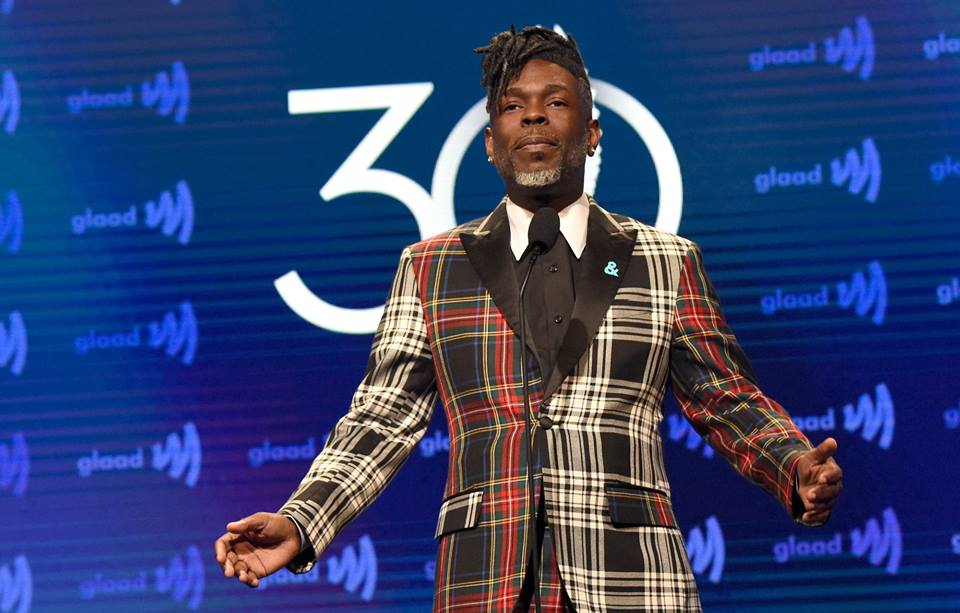 Who he is: Spectacular HIV activist, peer educator

What he’s contributed: Singletary brings a message of hope and faith to black men dealing with HIV by reassuring them that there is support for them, both from their own community and, despite what they have been told from the conservative preacher set, from God as well.

Why we’re proud: You have to have a lot of charisma to hold your own onstage with Beyoncé and JAY-Z, and Singletary has plenty to spare.

Singletary was among the black LGBTQ trailblazers who presented the power couple with GLAAD’s Vanguard award last March. He told the audience that he was inspired by “Beyoncé’s unending work ethic and her unending love for her fans and her kids to gain inspiration” for his own work as an HIV activist and educator.

Singletary wowed the crowd with his enthusiasm. “Beyoncé and JAY-Z concerts are like world peace is happening – it’s gay, straight, black, white, and everyone is dancing and singing together,” he said. “Those concerts are a place where everyone is safe and accepted. Could you imagine if the world was one big Beyoncé and JAY-Z concert? What a wonderful world that would be.”

But Singletary also spoke to his own experience that night. “I stand on this stage- the largest LGBTQ stage out there- knowing that you can be a little Black boy in Atlanta, and go to Church, and know that God still loves you – with or without HIV,” he told the audience.

Singletary was chosen to be a presenter because of his work with the COMPASS (COMmitment to Partnership in Addressing HIV/AIDS in Southern States) Initiative. The initiative, a 10-year, $100 million partnership with community-based organizations working to combat the HIV/AIDS epidemic in the South, is funded by Gilead Sciences, the maker of the PrEP treatment Truvada.

Singletary’s journey to the stage that night wasn’t an easy one. “The very first thing I ever heard about HIV is my mom saying, ‘This is the punishment that gays get from God for being gay,'” he told the online platform them. ” I heard that when I was six years old.”

Singletary was diagnosed as HIV positive in 2006. His health was precarious–he was hospitalized twice and his mother was told that he may only have months to live. When he did recover, he fell into substance abuse. Eventually, he found an online support group and got sober. Because he lost his old job, he turned to a new career as a peer educator for Clayton County, part of the Atlanta metro area.

The 9-to-5 job soon became 24/7 activism. Singletary started a Facebook Live stream called #hivandme, for black men who were in the church.

“When the church comes across a young man that’s LGBTQ, you can be a sinner, you can be a drug dealer, that’s ok — but to be a same-gender-loving man or woman, then your sin is the worst,” Singletary said. “I had to be the example of God loving a black queer man with HIV.”

Singletary also started a Facebook group, PoZitive2PoSitive, where he hosts live chats about thriving with HIV. His activism caught the eye of Gilead, which was looking for someone in the Atlanta area for the COMPASS Initiative.

“The COMPASS Initiative has allowed me the opportunity to show that you can be a Black boy with HIV and love God and know God loves you,” Singletary told them. “That pushed me to be a stronger activist. I always said before then that I never wanted to be the black face of HIV. But the fact is I have HIV, I’m doing well with HIV, and I have a platform that people listen to.”

As for the future, Singletary says that “I want to move my activism to a bigger level where people can see it more.” There’s no question that a lot of people could be helped by a message of support and love–or that Singletary is the perfect person to deliver it.