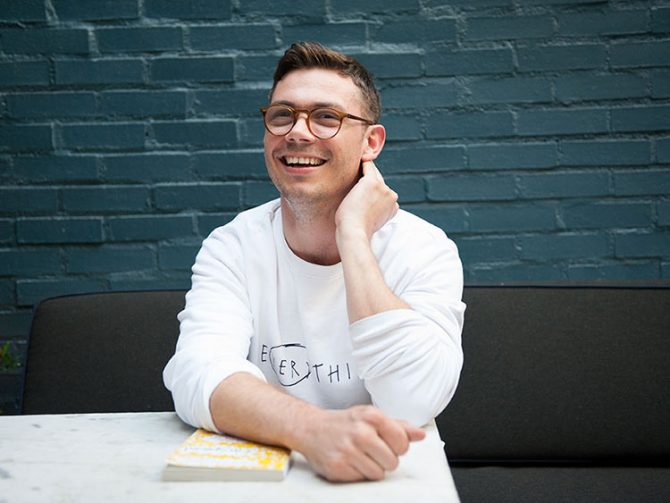 Ryan O’Connell never set out to be a television star. It just happened that way. With less than a month left until the Netflix premiere of Special–a show that will bring the first gay and disabled male character to the silver screen–O’Connell is feeling the pressure.

“I never wanted to star in Special but—and this make shock you— the world is not exactly swimming with gay 20-something actors who have mild cerebral palsy,” says O’Connell, who is gay and disabled in real life.

“I was considering waiting outside physical therapy places all across LA with a net and forcing people to audition, but my producers told me kidnapping was not the look, so I guess it had to be me!”

Based on O’Connell’s 2015 memoir, Special, which was officially greenlit in March 2018, tells the story of Ryan, a gay man with Cerebral Palsy who is hit by a car and realizes he can now pass as an accident victim.

Anybody who has read the memoir is sure to find parallels between O’Connell’s own life and the character on the show, but the similarities aren’t meant to be all encompassing, O’Connell says.

“The journey Ryan goes on in Special is different than the journey I went on,” he notes. “I mean, the emotions and themes are autobiographical. It’s all about how hard it is to run from who you really are, especially if you have a limp. But the actual things I’m portraying didn’t always happen to me.”

Of course, the voyage O’Connell has had to endure to get his show on the air hasn’t been easy.

“There were so many times I thought [the show was not going to happen], oh my god,” he says. “I always say that this show was limping its way to the finish line… we first went out with it and cable networks were like, ‘Gay? Cerebral Palsy? Love, but no.’”

Not to mention, his budding schedule: Prior to writing Special, O’Connell was staffed on a TV show, wrote a movie for DreamWorks, and finished work on a little show called Will & Grace, the latter of which he says was absolutely surreal.

“Co-creator Max Mutchnick has this brilliant ‘SNAP CRACKLE POP’ brain,” praises O’Connell. “Everything he says is LOL and being around him, you just hope his wit and smarts rubs off on you somehow. I’m so grateful to have been a part of it.”

Following Will & Grace, O’Connell was able to write all the scripts for Special, before it landed at Netflix months later. Looking back, O’Connell could not be more proud of the show’s trek, and what it could mean for others to see themselves represented.

“Growing up, if I had seen a [disabled] gay guy on TV or in movies who reminded me of myself, it would have probably altered the course of my life forever,” he says. “I know that sounds dramatic, but when you’re young and you feel like a freak for being who you are, not seeing yourself being reflected back at you basically confirms that. It tells you, implicitly, that you don’t matter.”

Literally used to hate my body, only saw it as disabled and broken and not chic, but I’m slowly coming around. Now if you’ll excuse me, I have to turn myself into Inspirational Thot jail.

Though, O’Connell is quick to note that this isn’t a show just for people who are gay and disabled.

“I think the fear many have is that a show about a gay disabled person will only be relatable to people who are gay and disabled but that’s bullshit,” he explains. “The personal is universal. You find shared experiences through specificity. I want people [both disabled and not] to watch Special and see themselves in it.”

Whatever the show represents to others remains to be seen, but O’Connell says the entire process has helped him examine his own thoughts and beliefs on disability (O’Connell has cerebral palsy in real life).

“I don’t think I even said the words ‘cerebral palsy’ out loud until my book came out. Now it’s my most used phrase next to ‘penis’ and ‘$80 candle,” he jokes.

“But my relationship with my disability is always evolving. I still struggle with internalized ableism a little bit and this feeling of not belonging to the disabled world or able-bodied world. It’s hard, honey… it’s a balancing act of doing the self-work while also not letting your disability consume you. But considering I didn’t even tell people I had cerebral palsy until I was 28 and, now, three years later, I’m doing a show about it, I’d say I have come a long way.”

As for what he is most excited for viewers to see? His character losing his virginity, duh. Not because he “wants the whole world to see [him] naked,” he says, but because the lack of gay sex representation in TV and film has always bothered him.

“I’m still traumatized by that panaway to the moon [during the sex scene] in Call Me By Your Name,” O’Connell jokes. “We didn’t film the sexiest gay sex scene in Special, but I’d like to think we were accurate.”

Sexy or no, we’re sure O’Connell is more than capable when it comes to the success of Special.

Catch all eight episodes of Special April 12 on Netflix. And hear him talk about his memoir in the video below.